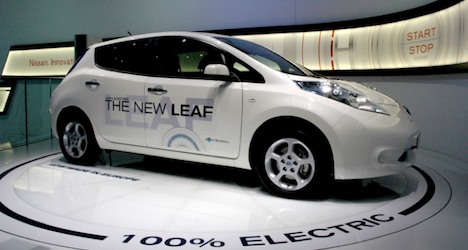 The Nissan Leaf: electric cars are getting less of a plug. Photo: Geneva International Motor Show

Electric vehicles were not completely absent from the showrooms as the 83rd edition of the Geneva show kicked off, but no new models were unveiled and car company executives on site for the media days this week barely mentioned them.

"Public confidence (in electric) has really fallen since its peak at the Paris show in 2010, when we only talked electric," BIPE analyst Clement Dupont-Roc told AFP.

Back then, French carmaker Renault, which leads the electric market, opened the order books for its first electric models and chief executive Carlos Ghosn said he expected the cars to represent 10 percent of the market by 2020.

Renault's compatriot PSA also plunged into the space, as did Japan's Nissan with its Leaf.

But as things stand today, sales have fallen far short of expectations.

In France, which claims to be the leading market in Europe for electric, less than 6,000 new such vehicles were registered last year.

The low volumes are part of the explanation for the weak offering on display in Geneva, but there are other issues as well.

"There are three tasks we have to overcome when it comes to electric vehicles.

One is pricing, second is the milage they can cover and the third is infrastructure," Osamu Masuko, the president of Japanese Mitsubishi, told AFP at the show.

Mitsubishi has been providing PSA with electric cars, but last August the French carmaker halted the influx since it was unable to unload the ones it already had.

"We had weak forecasts for electric, and now, we're selling even less than those weak forecasts," acknowledged Maxime Picat, in charge of PSA's Peugeot brand.

Nissan has also been unable to meet its objective of selling 9,000 Leafs in Europe.

As a result, it was showing a new version in Geneva offering better range and especially a lower price, according to industry media.

Chevrolet, which already has the Volt electric car and is preparing to launch a new, smaller one called Spark, is also not betting on a European boom in the segment any time soon.

"I don't see (electric) growing in a down market," Susan Docherty, who head's the company's European operations, said at the Geneva show.

Analyst Dupont-Roc agreed that growth in the segment will likely be a few years off.

"A turn-around could come in 2016, 2017, when the electric vehicles that are today mainly bought for fleets arrive on the second-hand market," he said.

In the meantime, carmakers are biding their time, offering environment-conscious customers low-emission-small-engine cars, and are highlighting other greenish technologies like hybrids.

The leader in the sector, Japanese Toyota, for instance unveiled a new electric/gasoline hybrid at the Geneva show.

And PSA was pushing its Hybrid Air technology, which uses petrol and compressed air.

"We want to show that electric hybrids are not the only possible solution," explained Karim Mokaddem, who is working on the project and promises coming cars will use just three litres of gasoline to drive 100 kilometres.

Germany's Volkswagen, meanwhile, unveiled its lightweight plug-in hybrid XL1 at the show, which it says consumes less than one litre of petrol per 100 kilometres and weighs less than 800 kilograms.

But Volkswagen is only planning on making 250 units, and is unlikely to immediately take the market by storm.

Nissan, German Daimler and US carmaker Ford are meanwhile aiming to hit the accelerator in their development of affordable fuel-cell vehicles — a technology that is taking a while to get rolling but that they hope to get on the roads by 2017.