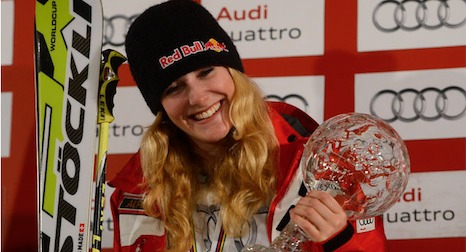 Smith, 20, was leading France’s Ophélie David by 89 points before the final event in Spain.

The native of Villars-sur-Ollon, in the canton of Vaud, had a comfortable lead but was spared having to compete to win the crystal globe.

Smith won four of seven races on the World Cup ski cross circuit for the 2012-13 season and claimed the world championship in Voss, Norway, two weeks ago.

Her championship win folllows the victory of Swiss men’s ski cross champion Alex Fiva in the overall standings for the 2012-13 season, giving the Swiss a clean sweep in the freestyle skiing championships.

Fiva, 27, who was born in California but is based in Graubünden, raced to three first place finishes over the season.

He came ahead of fellow Swiss Armin Niederer, 26, who finished second in the final ski cross standings.