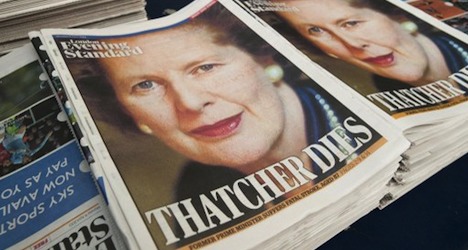 The rally occurred during the Iron Lady’s only official visit to Switzerland on September 20th 1990, late in her political career.

Around 300 people gathered in the Swiss capital waving banners and shouting hostile chants to protest Britain’s “occupation” of Northern Ireland.

A total of 17 people were arrested at the rally outside the parliament building.

Thatcher met with members of the Swiss government, as well as representatives from the business sector.

The Conservative party leader declared that Switzerland’s neutrality was no obstacle to membership in the European Community, the forerunner to the European Union.

Trained as a chemist, she paid a visit to Ciba-Geigy (a chemical and pharmaceutical firm that later fused with Sandoz to become Novartis) where she declared herself to be “very impressed” by the company’s facilities, the ATS news agency reported.

A day after her official visit ended, she and her husband Denis paid a private visit to a friend living in the Schloss Freudenberg on the shores of Lake Zug, the agency recalled.

In November 1990, two weeks before she resigned, Thatcher came to Geneva for the second world climate conference where she called for immediate action at a “global level” to stabilize carbon dioxide emissions.

Six years earlier, Switzerland attempted to play a mediating role in the normalization of relations between the UK and Argentina following the Falklands War.

A meeting between representatives from London and Buenos Aires was planned for Bern.

However, it never took place because of the inflexible position taken by Thatcher, former Swiss ambassador Edouard Brunner recalled in his memoirs published in 2002, ATS said.

Thatcher’s other connection with Switzerland involved her son, businessman Mark Thatcher, who obtained a Swiss residency permit in 1991.

He worked as a senior manager for Espirito Santo, a Lausanne-based finance company, ATS reported.

Mark Thatcher was subsequently rumoured to be involved in trafficking arms with Iraq, then under the regime of Saddam Hussein, the agency noted.

In January 1993, the Swiss federal government announced there was no “concrete evidence” to link him with such trafficking.

Three months later, he left Switzerland and did not renew his residency permit, ATS said.

In 2005, Mark Thatcher was fined the equivalent of $500,000 and sentenced to a suspended jail term in South Africa after pleading guilty to his role in an attempted coup in Equatorial Guinea.

He was found guilty of violating the South African “foreign military assistance” law, and was subsequently denied a residence visa in the United States.

Editor's note: This article was changed to correct an error in the second-to-last sentence regarding who was fined and sentenced in South Africa.