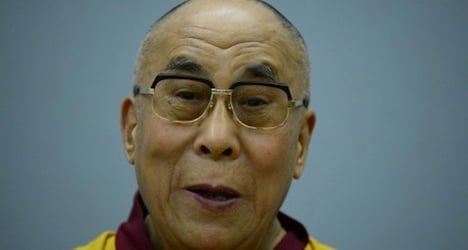 The 77-year-old exiled Tibetan spiritual leader led talks on the themes of “meditation, a source of inner peace” and “ethics beyond religion” at the Forum Fribourg, an exposition centre in the Swiss city.

The event was organized by the Rigdzin international Buddhist community, the FPC-Tibet foundation and the Gendun Drupa Centre.

Attracting many participants from outside Switzerland, the conference was sold out several weeks in advance.

The gathering on Saturday and Sunday raised a total of 250,000 francs, the ATS news agency reported.

On Sunday afternoon, the Dalai Lama received 2,000 exiled Tibetans, close to half of the Tibetan expat population in Switzerland, which is the largest in the world outside Asia.

In bright sunshine, the event featured sacred dances performed by monks from the Sera monastery in Mysore, India.

The Fribourg conference marked the second time the Dalai Lama has given lectures in French-speaking Switzerland, following his visit to Lausanne in 2009.

The Dalai Lama is set to meet with scientists at the University of Lausanne on Monday.

On Tuesday, he plans to meet with Maya Graf, a member of the Green party and chairwoman of the lower house of federal parliament (the national council).

He is scheduled to visit the Tibetan institute at Rikon in the canton of Zurich on Wednesday.

The Dalai Lama's visit to Switzerland follows a trip to Italy last week, where he was honoured with an award for minorities by the city of Bolzano.