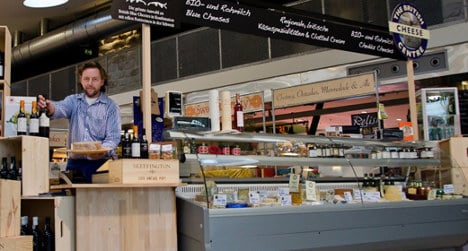 How did you end up working in Switzerland?

I met my Swiss wife in London eight years ago. At the time, I was working in the marketing field, producing large-format display graphics, and I thought I'd find similar work in Switzerland. But I soon realized that, in terms of marketing spend, Switzerland was a village compared with London.

So I asked myself: ‘What do Swiss people like that I know something about?’ As it happened, for the last 15 years, it had been my dream to work one day with food — and I began thinking about the fact that Swiss people love cheese. At least I knew that they're famous for making it, so I figured they must be famous for eating it. I looked around the shops and delicatessens and all I could find was Stilton and Cheddar of the inferior, industrial kind. That’s how the British Cheese Centre started.

Luckily, my wife already had a limited company here and we managed to find a fairly straightforward way to tag the cheese business onto hers. She helped with administration and all I had to do was choose the cheeses, transport them to Switzerland and find ways to sell them.

First we set up a small shop on the web and catered for special events like the St Patrick’s Day festival in Zurich or any events with a British element to them. I got the stall at the Hauptbahnhof (Zurich's main train station) four years ago and the Viadukt (the first permanent indoor food market in Switzerland) two and a half years ago. Now we also sell beer, wine, bagels, chutneys and other British foods.

Did you have any problems with the language barrier when you arrived?

I speak a bit of German but the problem is that everyone in Zurich speaks English – and they even come to my cheese shop just to practise, so it’s very rare that I get to speak German. I guess I speak enough German to talk about cheese, but I’m still struggling with conversation.

What do the Swiss think of your cheese?

I often say that Switzerland is the best country in the world in which to sell high-quality, expensive cheese. Zurich especially, because the people here are a lot more internationally-minded and cosmopolitan. Up in the mountains — where we live —  the people tend to be more conservative and believe that if cheese isn’t Swiss, then it simply isn’t worth eating.

Many of my customers just can’t believe that Britain makes good cheese. They often say to me: 'You must be really brave bringing cheese to the land of cheese'. When I tell them that Britain actually makes more cheese than Switzerland and France combined, they are absolutely astonished.

In order to do what I do, you need to use a lot of British charm and humour. In fact, a lot of Swiss people – especially the women – complain that the Swiss men are lacking in charm. My customers are not just buying cheese; they’re buying a bit of British culture and humour.

What are your most popular and least popular cheeses?

My bestseller is Godminster, an organic Cheddar produced near Cheddar Village in Somerset. I’m personally not a fan of it as I find it too soft and too sweet but it’s the kind of cheese that really fits the Swiss palette. Although I sell between 40 and 50 cheeses at any time, about 20 per cent of my sales are from Godminster alone.

How is British cheese different to Swiss cheese?

Swiss people often ask me if I think British cheese is better than Swiss cheese. This is impossible to say because the Swiss variety is a totally different style of cheese.

One difference is that, in Britain, we wrap a lot of our cheeses in cloth – and that gives it a special taste. Also, the fact that Britain is an island means that our cheeses have original tastes, whereas in mainland Europe many countries have copied from each other and shared ideas.

Switzerland’s most popular cheese is probably Emmental from the Emmental Valley. However, even among the Swiss, it has a bad name because it’s quite rubbery and bland. Many expats come here expecting amazing cheese, but when they taste it they wonder what the fuss is about. I prefer Gruyère which has been aged for two years and has a nutty, spicy taste.

Do you get many expat customers?

I’m quite famous among the expat crowd here but my best customers are Swiss. I often get British people asking me why I don’t just bring over some cheap mild Cheddar from Tesco, but I know that the Swiss wouldn’t buy it. It would just confirm their assumption that British cheese is bad. So I only bring over artisan handmade cheeses.

Where do you get your cheeses from?

Every five weeks, I send a truck over to pick up cheeses from a warehouse in London. All the cheeses come from small, mostly organic producers in the UK. From our two biggest suppliers, I get Godminster and Cropwell Bishop Stilton, which is produced on the edge of Sherwood Forest.

CLICK HERE TO SEE PICTURES OF THE BRITISH CHEESE CENTRE

How do you choose which cheeses to bring over?

I only choose original cheeses that have a story. For example, they might be organic or have a historical significance. The Swiss love “Stinking Bishop” because it translates almost literally in German and makes them laugh. It’s also Prince Charles’ favourite cheese and has a royal warrant on it – which the Swiss love.

What are the benefits of working in Switzerland?

I earn more here than I could in Britain because the Swiss are not worried about spending a lot of money on luxury products like cheese. It’s not unusual for people hosting a dinner party with six to eight guests to spend about 300 francs ($323) on the cheese course alone. I can’t imagine anyone in the UK spending £200 on a bag of cheese!

What about the disadvantages?

The Swiss are sticklers for rules, especially in the German-speaking part of Switzerland. In the French-speaking part, people tend to be a lot more laid-back — even the police.

Switzerland may be known as a country of low taxes but you soon realize that, one way or another, they will get their money back. The other day, a Weights and Measures inspector came to test my scales to make sure I wasn’t overcharging. When he'd finished testing them, he put a sticker on my scales and then got out a little book. I thought he was going to give me a certificate but instead he wrote out an invoice for 62.50 francs. It took him longer to write out the receipt than it took him to do the test! In under an hour going round the market he made about 1,200 francs.

Do you have any advice for expats looking for work in Switzerland?

I'd advise anyone starting a business to avoid just targeting the expat community. I see this all the time — expats starting a business that targets fellow expats. The Swiss are not only more plentiful but also generally happier to spend more money on high-quality products and services. Expats come and go and are more price-conscious.

You can visit Michael Fontana-Jones' website here and Facebook page here. His stall can be found at the food market at the Hauptbahnhof (Zurich's central railway station) on Tuesdays and at the Viadukt market six days at week until 8pm.