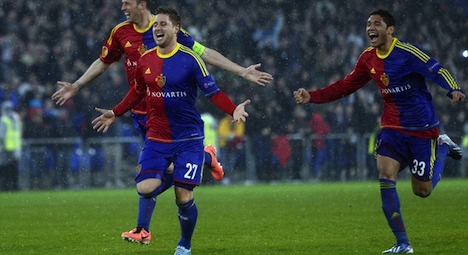 Winners of last season's Champions League, Chelsea have had to make a priority of Europe's second-tier cup competition this term as opportunities for winning silverware have fizzled out around them.
They are just two matches from the final in Amsterdam on May 15th, but in Basel they face a team who sensationally knocked United out of last season's Champions League and put paid to Spurs in the last round of the Europa League.
The current Swiss Super League leaders have also gone six home games without defeat in this season's competition.
Complicating matters further is the fact that Chelsea's main priority is the battle to qualify for next season's Champions League.
Having become the first defending champions not to progress beyond the group phase of the following campaign's competition, failure to qualify for next season's tournament would complete a startling fall from grace.
The quest for a Champions League place was compromised on Sunday by a 2-2 draw at Liverpool that left the London club in the fourth and final qualifying berth.
Given the intensity of the competition for a top-four finish in the league, Chelsea's extra-curricular activities in Europe threaten to take a costly toll, but goalkeeper Petr Cech says their dedication to the competition remains uncompromised.
"We are in a position where we fight for everything," Cech said.
"We have a lot of pressure playing in the Europa League because we obviously want to win it," he said.

"Every league game we are in the fight for the top four places and it's very tight there."
Chelsea interim manager Rafael Benitez has sought to keep his squad fresh by changing his starting line-up between each league and Europa League fixture, and he is likely to do so again at St Jakob Park on Thursday.
That may mean a return to the substitutes' bench for striker Fernando Torres, who played the full 90 minutes at former club Liverpool on Sunday.
However, the Spaniard has started all six of Chelsea's games in this season's competition and sees the Europa League as an opportunity to atone for a disappointing campaign.

"The competition is helping the team a lot, because it is giving us a lot of satisfaction — not like in the Premier League this season, and we lost the semi-final of the FA Cup, so we were also close (there)," he told uefa.com.
"But the Europa League is keeping us in a good mood and thinking it could be a good season."
Basel reached the last 16 in the Champions League last season before being crushed 7-1 on aggregate by Bayern Munich, who lost to Chelsea in the final.
They do not appear to have been scarred by the experience, however, having beaten Dnipro Dnipropetrovsk and Zenit St Petersburg before edging Spurs on penalties after a 4-4 aggregate draw in the last eight.
Basel hope to become the first Swiss team to reach a major European final, and manager Marat Yakin says they will not be overawed by Chelsea.
"Fenerbahce would obviously have been a special draw for me, but now we simply have to find a way to prevail against Chelsea," said Yakin, who is of Turkish descent, after the semi-final draw earlier this month.
"Chelsea are the best team left in the competition, but there is no reason to feel upset or afraid of this draw."
The English side can at least console themselves that they will not have to face Basel's former talismanic striker Alexander Frei, who retired from football to take up a managerial post at FC Lucerne earlier this month.