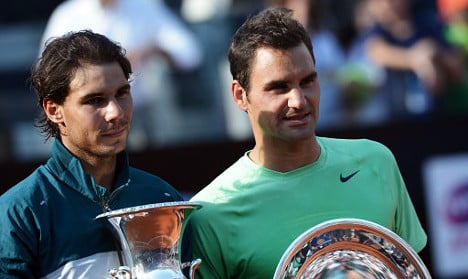 The Spaniard, winning his sixth title from eight finals this season after returning from a seven-month injury absence, showed he is back to his best on his preferred surface with a masterclass which should boost his hopes of extending his record French Open tally to eight wins at Roland Garros next week.

But Nadal refused to speculate on what will be required to achieve that goal.

And he was equally coy when asked about the glaring scoreline: "It's because one player is playing very well and the other player is having more mistakes than usual."

"In Madrid I started to have the right feelings, about my forehand, about my backhand and about how I want to play."

Nadal said he only had one slip-up in Rome and it came in the third round when Latvia's Ernests Gulbis pushed him to three sets.

"Here, I only had one bad match, against Gulbis, but I was there mentally. I won that match with a lot of fight and a positive mentality.

"And yesterday and today I played at a very high level."

Nadal admitted he had never dreamed of such success — he now has 36 wins in 38 matches since his return to the tour in February.

"If you'd told me that four or five months ago I would have said you are crazy," said fifth-seeded Nadal.

"So after eight tournaments, six victories, and two finals, it's a dream for me."

Federer, the second seed, had overcome French upstart Benoit Paire in a late semi-final on Saturday to make his first final of the season.

But despite winning the opening game on serve on Sunday the Swiss failed to really get a grip on the match.

In all, Federer finished with 32 unforced errors to Nadal's eight.

"He played very aggressively from the start, he didn't make too many mistakes and had a good match overall," said Federer, who admitted the change in class from his previous challengers this week had been a factor.

"Rafa has much more top-spin than all the guys I played this week, so the change was quite a big one.

"I tried to play offensively, but unfortunately I didn't have the best day. It didn't go the way I was hoping it to go."

Nadal clinically broke the Swiss twice on his way to a 6-1 first set score inside 23 minutes.

Federer put up more resistance in the second but despite breaking back to 5-2 in the seventh game, and then holding serve to close to 5-3, Nadal brought up three championship points in the ninth game and required only one to seal the match with a cross-court forehand winner.

Calling it a "one-sided result", Federer added: "I was missing too many easy forehands and crucial points and I didn't string them together and so … I played pretty good tennis but perhaps it was too quick a turn around and Rafa was playing really well."

Nadal now has 24 Masters titles in a career total of 56.

He will be the favourite for Roland Garros, which starts next Sunday.

But the Spaniard said: "I don't want to think about Roland Garros yet. Let me enjoy today first."