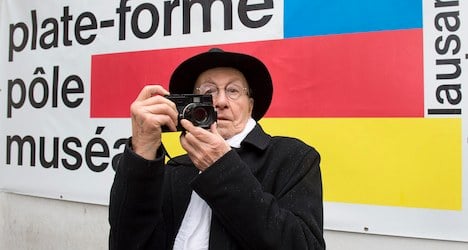 René Burri at the proposed future new home of the Elysée Museum next to Lausanne's train station. Photo: Elysée Museum/ARC

The Elysée Museum, a temple for photography buffs from around the globe, said it would become the long-term home for an estimated 30,000 of Burri's works.
"René Burri has been present wherever history plays out, and, with acumen, has borne witness to the defining moments of his time," the museum said in a statement.
Burri, now 80, has been a member of the renowned Paris-based photography agency Magnum since 1959.
His famous works include his 1963 portrait of Che Guevara, which among iconic photos comes just a hair's breath behind Cuban Alberto Korda's 1960 picture of the revolutionary.
Burri is also known for his photographs of artist Pablo Picasso,  architect Le Corbusier, and his reportages on Brazilian megacities, as well as coverage of conflicts in the Middle East and Vietnam.
"We won't necessarily have all of René Burri's photographs, but we will have the major part," Swiss news agency ATS quoted the museum's director Sam Stourdze as saying.
Burri, meanwhile, said creating an archive at the Elysée Museum would finally help bring some order to his huge collection and preserve his work.
"What can I do with thousands upon thousands of photographs that have built up since the 1950s?" he said, according to ATS.

"I find them in every nook and cranny," he said.

"Today, I'm going to spend some time identifying what I've amassed over 50 years."