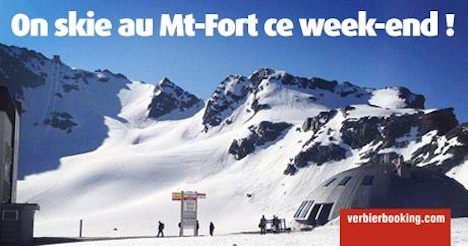 Téléverbier and Télénendaz, the lift operators of the resort in the canton of Valais, have agreed to open on July 13th and 14th to allow enthusiasts to schuss down from the summit of Mont Fort at 3,300 metres to the Gentianes Pass at 2,900 metres.

A month and a half ago, Téléverbier offered to open part of the ski resort for a weekend following heavy spring snow but was subsequently forced to cancel the event because of poor weather.

“This time nothing should prevent taking advantage of the still abundant snow at high elevations,” the Verbier/Quatre Vallées resort operators say on their Facebook page.

The planned opening marks the return of summer skiing at the resort for the first time since the 1980s.

“It’s been 25 years that we have no longer been skiing in the summer,” Eric Balet, managing director of Téléverbier, told the 20 Minutes newspaper.

“But here there is excellent spring snow and we will be able to ski.”

The resort is offering a lift price of 20 francs per person, although the window for skiing is expected to be limited to roughly between 10am and 1pm.

Skiers are warned to stick to marked areas or risk falling into a crevasse.

Lifts from Le Châble, Verbier and Siviez (Nendaz) are scheduled to open at 8am on both Saturday and Sunday, when sunny weather is forecast.

Two restaurants will be open at the area open for skiing.

Operators say even non-skiers can benefit from the 20-franc lift pass deal to take in the panoramic views.