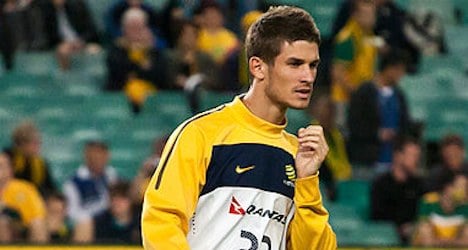 Vidosic playing for Australia against Paraguay in 2010. Photo: Wikimedia Commons

The attacking midfielder, 26, previously had stints with Nuremberg, Duisburg and Arminia Bielefeld in Germany from 2007 to 2011.

"Dario has a great opportunity to play in Europe again, which is something he was keen to do," Adelaide United general manager Michael Petrillo said.

"After receiving a transfer request from FC Sion I can confirm that both clubs have agreed to terms for Dario's transfer and at this stage it's likely he will leave for Switzerland tonight."

Vidosic made 60 appearances in all competitions for Adelaide, scoring 15 goals.

He debuted for the Australian national team in 2009 and has made 18 international appearances.