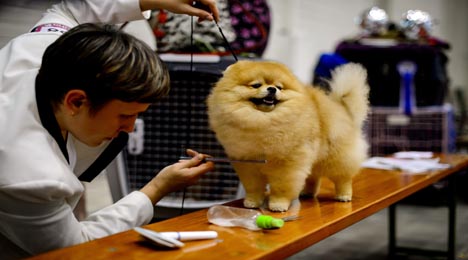 A dog is pampered prior to a parade during the European Dog Show in Geneva. AFP Photo / Fabrice Coffrini

Huge, tiny, bald, or fluffy, but all groomed to the extreme.

"The brushing is also good for calming the nerves — both his and mine," says the 58-year-old Norwegian, bending down to rub noses with AL-x, who is balancing on a small folding table, apparently oblivious to the pumping music, barking and scattered applause filling the exhibition hall on the outskirts of Geneva.

The small, white fluffy ball of fur with his pointy face and ears will soon enter the ring in a bid to add a European title to the global one he already has under his collar this year.

Teeth, fur, posture: the jury studies every detail, first classing the dogs within each of the 230 races represented at the three-day event, then within 10 groups, and finally, by Sunday night, they will name one dog the loveliest of the lot.

Despite a long list of scientific standards, show organiser Laurent Pichard acknowledges that "a human interpretation of beauty" also plays into the decision.

For the dogs themselves, the road to glory can be uncomfortable: many wait for hours in cages before they are taken out for further hours of grooming, sometimes including the use of curlers, styling products and even perfume.

The long wait is interrupted only by short trips to one of three large outdoor "dog toilets", or walks through a multitude of stands offering everything from dog food to bead-studded leashes and dog magnets — sidestepping pools of urine on the floor as they go.

Then in the ring, the pressure is on: the dog first stands still as its impeccably dressed handler adjusts the position of its feet, head, and pulls the tail to make it point upwards.

Then they together walk and run round after round to show off the elegance of the canine's strides.

There are no cash prizes, but the winning "couple" will receive tickets to Orlando, Florida to take part in the world championships there.

"The breeders do this for their own personal satisfaction," Pichard explains.

That is certainly the case for Balken.

"It is great using resources and time on what you are interested in. As long as the dog is happy to do what it is doing, it is really a ball," he says, pointing out that he and AL-x go to as many as 30 shows a year.

Beauty is not the only focus at the show, which also features competitions focused on abilities like "dog-dancing", where dogs and their handlers do
small choreographed dances to music.

"There are some parallels to figure skating," says dog-dancing instructor Christiane Buhler, after showing off her skills with a small, black Schipperke.

One of her students, in his 80s, also dances around the ring with his golden retriever, which rolls over, runs in circles and walks between his legs on queue.

"Both the owners and the dogs have so much fun," Buhler says.

Not everyone is as enthusiastic about dog shows.

"Dogs are intelligent and complex animals, and not toys," animal rights group PETA wrote to AFP in an email, describing shows like the one in Geneva as "degrading" and cautioning that the beauty products used could harm the animals' health.

Sylvie Menetrey, a dog trainer and a dog show commentator, disagrees, insisting that the training needed to attend a show is good for the dog's
development.

"It's great to love, feed, care for and walk your dog, but dogs have brains and they need to use their brains to learn things," she says, insisting: "It makes them happy."