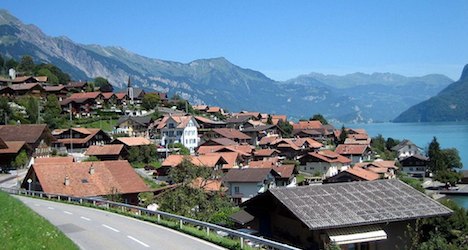 An employee died and another was missing following an explosion at Hamberger Swiss Pyrotechnics, located in the village of Oberried on Lake Brienz, cantonal police said.

Police said the explosion occurred as the two workers were in the process of destroying "waste material" at a place designated for the destruction of explosive substances.

The blast seriously damaged the  facade of a nearby house, which was unoccupied at the time, police said.

Local residents reported a “big bang” at around 7.40am followed by a plume of smoke from the company’s lakeside factory, various Swiss media reported.

Police, fire and emergency crews rushed to the scene.

However, a large area was cordoned off and the main road in the area was closed to allow investigators to further examine the causes of the explosion, police said.

The company subsequently clamped down on safety measures, introducing a no-smoking policy on the site, newspaper Blick reported.

Hamberger Swiss Pyrotechnics employs 30 people and has produced fireworks since 1863, the company says on its website.

Blick reported online that the company is set to move to a new location as Dutch developers are planning to build a luxury resort on the property.

In addition to fireworks, Hamberger says it makes explosives to control avalanches and "pyrotechnics" for military use.