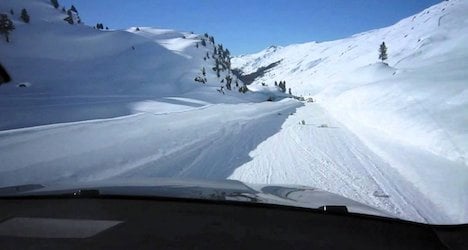 Meteo News reported from 40 to 80 centimetres of the white stuff at elevations above 2,000 metres in the southern, central and eastern Alps.

Snow also fell in the Jura Mountains with sub-zero temperatures at levels as low as 700 metres.

Strong winds gusting up to 114 kilometres an hour were reported at Monte Generoso in Ticino late Thursday, the ATS news agency said.

Windy conditions also hit Lugano, where gusts were clocked at 93 km/h, and Stabio (88 km/h), both in the canton of Ticino, while Neuchâtel reported winds of up to 80 km/h.

Heavy snow closed several mountain passes, including those at Flüela, San Bernardino and Splügen in the canton of Graubünden, all above 2,000 metres.

Tyre chains were required on many mountain routes as the freezing level dropped.

Meteo Swiss, the national weather office, is forecasting continuing cool and wet weather on Friday and Saturday with more snow in the Alps.

Warmer conditions are forecast across the country on Sunday, with mostly sunny skies and high temperatures of 16 expected in Zurich and Sion (Valais) and 14 in Geneva.

Milder temperatures are expected through the early part of next week.