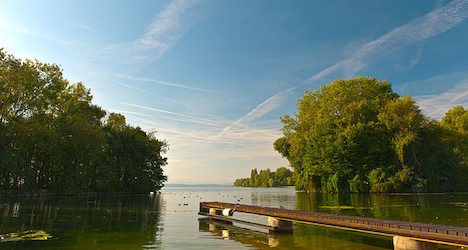 Lakeside part of Colombier, near the site of a prehistoric settlement. Photo: Wikimedia Commons

Cantonal authorities on Wednesday announced the find in Colombier, a village five kilometres west of the city of Neuchâtel.

Remains of four lakeside settlements more than 3,000 years old, along with Roman ruins have already been discovered in the community, known for its medieval castle.

The ensemble of burial sites was found after Le Lacustre restaurant was demolished to make way for a service station.

The three tombs date from between 1660 to 1300 BC, with the principal one located in the centre of a tumulus, a mound of stones and earth raised over the grave.

“These discoveries just confirm the importance of the site,” the canton said in a news release.

Back in 1876, a dolmen or collective tomb dating from the Neolithic period was unearthed, along with close to 20 skeletons, while the restaurant was being built.

Unique in the canton, the reconstituted dolmen is now visible in the Laténium park, where a museum harbours the archeological section of the University of Neuchâtel.

The tumulus, which was partially destroyed when the restaurant was built in the 19th century, was a funerary monument originally circular with a seven-metre diameter base, the canton said.

It would have been visible in the region thanks to a mound that has since disappeared.

Scientists believe the main tomb was probably for a man aged at least 30 who was bereft of ornaments save for a pin found on the thorax.

Burials under a tumulus were destined for individuals of a high social rank, such as chiefs and dignitaries.

The canton said one of the other tombs was likely for a woman buried around 1300 BC, found with amber pearls and pins and hooks made of bronze.