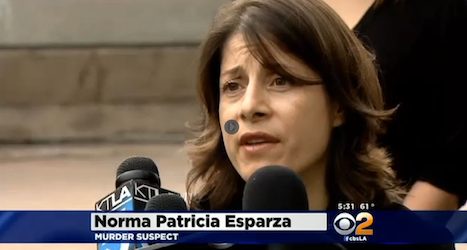 Norma Patricia Esparza, 39,  was taken into custody on Thursday after going before TV cameras to publicly declare her innocence after being charged with “special circumstances murder” in the killing of Gonzalo Ramirez, 24.

In a video aired by CBS Los Angeles, Esparza says prosecutors are pressuring her to plead guilty to a less charge of voluntary manslaughter.

“It’s essentially something I cannot accept because it would essentially be a lie,” she said before the cameras.

Police from Irvine, California found Ramirez’s body on the side of the road on April 16th 1995 after he was beaten and hacked to death with a meat cleaver.

The prosecution alleges that Esparza, who lives in France near the Swiss border with her husband — a neurobiologist who also works in Geneva, conspired to commit the killing, although she did not carry it out.

According to court records, Esparza maintained that the victim had raped her in a college dorm after meeting her in a bar.

She did not report the assault but told a former boyfriend about it two weeks later.

Esparza testified to a grand jury last year that she pointed out the victim to the ex-boyfriend, Gianni Anthony Van, the Los Angeles Times reported.

Van and two other people, including fugitive Shannon Gries, are accused of murdering Ramirez at a transmission shop.

The owner of the transmission shop died during a shoot-out with a SWAT team last year.

Esparza told the grand jury she thought “the worst that would happen is that he (her ex-boyfriend) would rough him up”, the Los Angeles Times said.

Complicating her case is the fact that she began dating Van again after the death and eventually married him.

She said she did so because she feared for her life “and was told that if she married him she couldn’t be forced to testify against him”.

A scholarship student who earned a PhD, Esparza later divorced Van, moved to France and was hired by Webster University to teach at the Geneva campus in 2009, according to a report from The Journal, an online news outlet for the university.

American police arrested Esparza in October 2012 after she stepped off a plane in Boston while en route to a Webster University-related meeting in St. Louis, the website reported earlier this year.

Webster University listed Esparza as a full-time research faculty member in Geneva for the 2012-13 year, The Journal said.

She was free on $300,000 bail but this was revoked after a hearing on Thursday when she was taken into detention.

The Los Angeles Times identified her husband as Jorge R. Mancillas, a neurobiologist who works on global health issues in Geneva.

Mancillas spoke in defence of his wife, who had her four-year-old daughter next to her as she appeared before TV cameras.