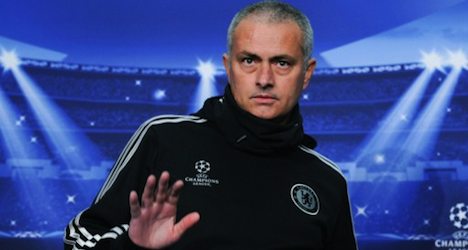 Mourinho's team can guarantee their place in the knock-out stages with a draw in Switzerland, while a victory would ensure they are certain to finish top of Group E ahead of their final fixture against Steaua Bucharest.

That clash with Steaua comes in the middle of a busy December for Chelsea and Mourinho would prefer to be able to rest players when the Romanians visit Stamford Bridge.

With that in mind, Mourinho on Monday challenged his players to show they can finish off Basel, who are four points behind Chelsea in third place.

"It's a period I like," Mourinho said of the hectic fixture December schedule.

"It's a period where I think only the braves can survive because it's hard," he said.

"We go into the Christmas period and the accumulation of matches is so high, but we do it as a special group with a special mentality, enjoying the situation, forgetting we don't have a Christmas (break) like the Spanish, Italian and German players."

Mourinho said the motivation to win Tuesday's game is "to try to kill the situation in the group phase and give us a little bit of space in December; instead of having nine real, competitive matches, we only have eight."

Mourinho looks in the mood for the battle ahead after trimming his hair to a ultra-short crew cut during the recent international break.

The former Real Madrid boss borrowed hair clippers from Chelsea striker Fernando Torres, cut his hair himself and then sent a picture to his wife for her approval before heading home.

"Some people can't do what I did," Mourinho said when asked why he cut his hair.

"In a couple of months I'll have hair again — some other people cannot do it."

Mourinho said he "asked Fernando to give me his machine and I did it myself in front of the mirror — i's nice and cheap."

Basel must match Schalke's result against Steaua on Tuesday and then beat the Germans next month to qualify for the last 16 and Mourinho hopes the strain of having no margin for error will prove too much for the Swiss side, who claimed a shock win at the Bridge earlier in the season.

"They are under pressure and we are not," Mourinho said.

"We can finish the job to qualify and Basel, even if they win tomorrow, have to play a last final at Gelsenkirchen."

For Basel, the situation is difficult," he said.

"This shows clearly that, after the first match, we did our job and they didn't do theirs.

"This Chelsea is better than the Chelsea that played at Stamford Bridge.

"Hopefully we can continue the good run we've had in the Champions League and finish the job."

Torres is fit to return after missing the last three matches due to injury, but defender David Luiz did not travel to Switzerland after suffering a knee problem.