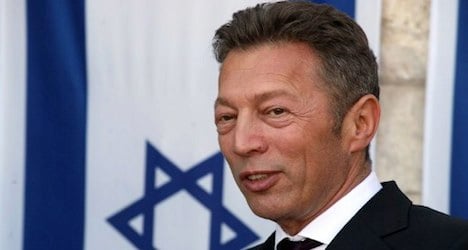 Gaydamak, 61, is wanted in France for his role in the 1990s "Angolagate" affair, involving illegal arms sales to the African nation during its civil war.

The Russian resident was detained last week in Switzerland's financial hub Zurich in what Swiss public television said is a separate case.

Geneva prosecutor Dario Zani told AFP Tuesday that Gaydamak had asked the Swiss justice authorities to grant him bail and that they would rule on the request "over coming days".

Soviet-born Gaydamak has been involved in a string of highly complex legal affairs, and was in Switzerland to discuss with lawyers a case related to the controversial sale of a phosphates factory in Kazakhstan.

But it was an entirely different case that led to his arrest on November 19th, on a warrant issued four days earlier by Geneva justice authorities.

Gaydamak stands accused of breach of trust linked to the Israeli football club Beitar Jerusalem, which he once owned.

According to Swiss public television channel RTS, Gaydamak allegedly did not pay 400,000 euros ($542,000) owed to Luis Fernandez, a former French footballing international and ex-manager of Paris Saint Germain, who coached Beitar from November 2005 to June 2006.

Fernandez, who also coached Israel's national team in 2010-2011, now devotes his time to football punditry in the French media.

Swiss prosecutors got involved because the money reportedly was meant to be paid via Geneva, but Fernandez allegedly never received it.

Gaydamak's Swiss lawyer Marc Bonnant told RTS that his client had paid the money and said he hoped the arrest would not give rise to "extradition requests" from France.

But in Paris on Tuesday, prosecutors told AFP the French had filed an extradition request.

France issued a warrant for Gaydamak last December, after having failed repeatedly to bring him to court.

Zani said that Swiss officials had informed Gaydamak that France was seeking his handover.

Pasqua was accused of receiving illegal payments in return for lobbying for a $790 million sale of arms to Angola in the 1990s.

The payments came from two intermediaries, businessmen Gaydamak and Pierre Falcone, for sales including warships, helicopters, tanks and munitions.

Zani said that Gaydamak had also sought to play the diplomatic card — he reportedly holds Angolan citizenship awarded for services to the country.

Angolan President Jose Eduardo dos Santos and other senior Angolan figures were also accused of receiving kickbacks from the deal.

The resource-rich African nation was locked in conflict for four decades, first fighting colonial ruler Portugal and then, after independence, sliding into civil war in 1975.

Angola was a Cold War battleground, with Soviet and Cuban forces backing left-leaning forces and South Africa lending manpower to their adversaries.

Angola was fertile ground for arms dealers — peace only came in 2002, a decade after the Cold War ended.

In October 2009, a French court convicted Gaydamak, who had gone on the run, in absentia for his role in the case and sentenced him to six years in prison.

Pasqua received a one-year jail term, while Falcone was sentenced to six years in jail over illegal arms sales and paying bribes.

But in April 2011 a Paris appeals court reduced Gaydamak's sentence to three years, for money laundering and tax fraud.

Pasqua had his conviction overturned in 2011, while Falcone had his sentence reduced to 30 months.

The trouble-courting Gaydamak emigrated to Israel in the 1970s when the Soviet Union finally granted exit permits to so-called "refusenik" Jews who had long wanted to cross the Iron Curtain.

Leviev fought Gaydamak in a London court over Gaydamak's claim that he was owed $1 billion on commissions for Angolan diamond deals. Leviev won the case, with costs.