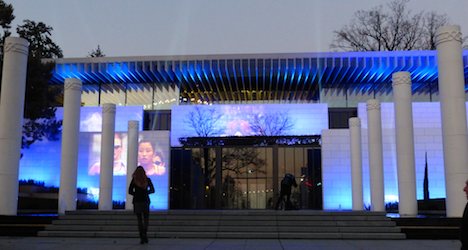 Visitors can expect to see dramatic changes after the four-storey building was overhauled inside and out by a team of 70 companies, including Swiss architects Brauen & Wälchli, at a cost of 55 million francs ($61 million).

The outgoing president of the International Olympic Committee, Jacques Rogge, and his successor Thomas Bach, jointly cut the ribbon on Tuesday to officially inaugurate the museum that will open to the public on December 21st.

The attraction originally opened in 1993 and closed in January 2012 for the refurbishments.   For the past 23 months some of its exhibits have been displayed on a CGN boat moored in front of the museum on Lake Geneva.

The new presentation aims to reflect the "diversity and richness of the Olympics," and the relationship between the Games and society as a whole, according to Frédérique Jamolli, the museum's Head of International Cultural Development.

"It's not just about Olympic sport, it's about history, culture, design, technology and all the things that have developed through Olympism," she said.   "It's a lens through which to observe society."

The museum is organized into three themes, the first of which is The World, which examines the influence of the Olympics.  Visitors are taken back to the origins of the Games in ancient Greece, and the founding of the modern Olympics by French aristocrat Baron Pierre de Coubertin in 1894.

The section goes on to illustrate the creativity displayed by host cities around the world in terms of stadium architecture, Olympic torch design and opening ceremonies.

The second theme, The Games, focuses on sporting achievements at the summer and winter Olympics through more than 1,000 video clips available to view alongside clothing and equipment used by athletes.

The final theme concerns the Olympic spirit, featuring exhibits about the health and nutrition of athletes, their physical and mental challenges, anti-doping and the principle of fair play.

The permanent exhibitions are concluded with a room displaying medals from every modern summer Games dating back to the first in Athens in 1896.

With a particular focus on interactivity and digital presentation, the museum features over 150 screens, including a 180-degree cinema showing footage of past games, and video interviews with athletes, in French and English.

IN PICTURES: VIEWS OF THE NEW OLYMPIC MUSEUM

Visitors can analyse their eating habits in a display dedicated to athletes' nutrition, before testing their balance and coordination with interactive activities based on biathlon, curling and slalom skiing.

This visitor experience is a completely new concept for the museum, Jamolli told The Local.

"Each time the visitor enters a new zone that means he will be in a new atmosphere,” she said.

“We wanted to create a scenography that makes sense with the content."

The changes also extend to the landscaping outside the museum.   New features in this 'Olympic park' include a 100-metre running track and bronze sculptures illustrating Olympic disciplines.   The names of torch-bearers who lit the Olympic flame are engraved on the steps leading up to the museum from the Quai d'Ouchy.

In addition to the permanent collections, the museum will host a series of temporary exhibitions beginning on January 24th with two displays linked to the Sochi Winter Games in Russia in February.

The museum’s reopening coincided with an executive board meeting of the IOC, headquartered in Lausanne since 1915.

The board used the opportunity to conduct the traditional "key ceremony" at the museum, where outgoing IOC President Rogge handed over the ceremonial key to the IOC to Bach, who became the organization's ninth president on September 10th.

A former Olympic fencing champion for Germany, Bach was IOC vice-president under Rogge for ten years.

“The Olympic world is at the same time traditional and ultramodern,” Bach said.

“This museum manages to convey that combination in an exciting and innovative way, and thereby reach young and old alike,” he said.

“If there is one place outside the Olympic Games where the Olympic spirit can be felt to the same degree, it is this entirely redesigned museum, here.”

The public can visit the museum for free from its public opening on December 21st 2013 until January 23rd 2014. Tickets normally cost 18 francs for adults, 10 francs for children.

Further information can be found on the museum's newly launched website at olympic.org/museum