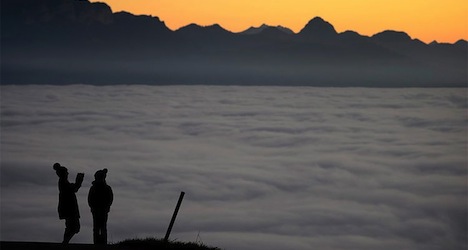 MeteoSwiss, the national weather office, says the pea-souper conditions are affecting areas below 600 metres in cities that include Lausanne, Neuchâtel, Bern, Lucerne and Zurich.

With temperatures hovering either side of zero, the conditions have given rise to black ice, making driving on some roads a hazardous affair.

Police reported at least 50 motor vehicle accidents in Basel-Country on Saturday after roads were turned into skating rinks by freezing rain.

Police received around 250 phone calls from people affected, although no serious injuries were reported.

In the canton of Jura, where police blamed slippery roads for 15 accidents, PostBus suspended service for several hours, the ATS news agency reported.

The atmospheric conditions have led to elevated pollution levels in mountain areas.

In neighbouring France, authorities have reduced speed limits on motorways through the French Alps by 20 kilometres an hour in a bid to reduce emissions trapped by the fog.

But above the mist, ski resorts are benefiting from sunshine and warm temperatures caused by a temperature inversion, making for spring-like conditions on the slopes as more areas opened for the season on the weekend.

Many runs remain closed due to lack of snow, however, with most resorts relying on snow-making equipment for cover at lower elevations.

Meanwhile, poor visibility forced the cancellation or delay of at least 18 flights at Geneva's airport by late Monday afternoon, with certain flights bound for the Swiss city rerouted to Lyon.

MéteoSwiss is predicting a change in weather patterns on Thursday, with milder temperatures and rain forecast in western and northern Switzerland coupled with snow in the Alps.