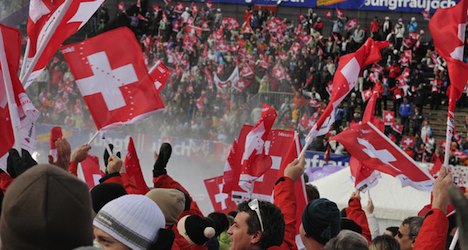 First up is Wengen, in the canton of Bern, featuring the longest downhill course on the circuit at more than 4.4 kilometres.

It is a stunning setting, the race taking place in the shadow of the instantly recognizable Eiger mountain, standing 3,970 metres (13,026 foot) high, with the equally impressive Jungfrau (4,158 metres), Moench (4,107metres) and Shreckhorn (4,078 metres) to either side.

The notorious downhill starts at 2,315 metres and features a drop in altitude of 1,025m, with the steepest part measured at a vertiginous 42 degrees.

It remains one of the top events in the Swiss sporting year, drawing in some 60,000 fans over the three days of racing, more than half for Saturday's downhill.

That figure is even more impressive when one considers that access is only permissible by train on a single-track railway — there are no cars in Wengen, where the streets are kept covered in snow on purpose.

In a reflection of how important alpine skiing is to the average resident of Switzerland, nearly one million viewers tuned into Swiss television's coverage of last year's downhill, a massive 73.4 percent of the market share.

Friday's super-combined, followed by the downhill and Sunday's slalom, along with the January 22nd-27th programme in the equally glitzy Austrian resort of Kitzbühel, are a chance for racers to lay down markers ahead of the February 6th-23rd Olympics.

But perhaps more importantly it offers skiers the chance to further hone physical form, boost mental confidence and work out any technical gremlins on two of the scariest courses on the World Cup circuit.

Each piste is technically demanding and there have been numerous casualties from dramatic falls that leave huge crowds at the finish area gasping.

"Exciting times ahead!!" blogged Norwegian Aksel Lund Svindal, who won super-G gold at the 2010 Olympics, as well as a silver (downhill) and bronze (giant slalom).

He noted "2013 was a great year," in reference to his world downhill gold in Schladming in February.

"Now it's 2014 and the next weeks and months are packed with highlights," he said.

"I feel good, I'm skiing fast and ready to have some fun — first in Wengen and Kitzbühel.

"These are two great World Cup races with spectacular courses, big crowds and lots of adrenaline."

Austrian Marcel Hirscher leapfrogged Svindal to the top of the overall World Cup standings with his victory at the Swiss resort of Adelboden last week.

The victory was Hirscher's fourth this season and 22nd of his World Cup career.

The 160 points the Austrian accumulated last weekend lifted him to 675 points, passing Svindal's 652.

The duo sit far ahead of third-placed American Ted Ligety (333), in a battle for the final podium place with France's Alexis Pinturault (326), Germany's Felix Neureuther (311) and Austrian Hannes Reichelt (296).

The Swiss team has struggled to make its mark.

Beat Feuz finished 14th in the training run on the Lauberhorn on Wednesday, marking his first comeback after an injury in 2012.

Patrick Küng finished third in the training run and is seventh in the overall World Cup Alpine standings.

Carlo Janka is the next highest Swiss in 22nd place ahead of Didier Defago in 29th.

Pinturault claimed the super-combined in Wengen last season and Neureuther the slalom, ahead of Hirscher, while the downhill went the way of Italian Christof Innerhofer, with Reichelt taking third behind teammate Klaus Kroell.

In the past, it has often been the all-rounders that have thrived on the Lauberhorn, with American Bode Miller claiming two downhill victories and one in the super-combined with four other podium placings.