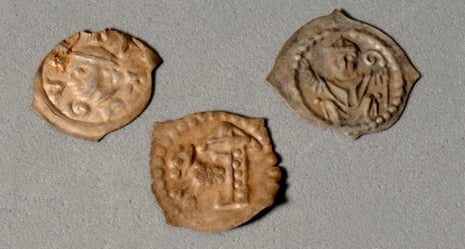 The “sensational” find was made between two rocks near a path above the village of Lungern, the canton announced on Thursday.

A group of archeologists from the Prospecting Working Group of Switzerland (AGP) began searching the area in the autumn of 2013 with students from the University of Basel.

The one-sided embossed coins date from the founding period of the Swiss confederation, begun by the three cantons of Uri, Schwyz and Unterwalden.

Were in a leather or cloth bag believed to have been either hidden by a traveller or simply lost between the years of 1280 and 1290.

Two-thirds of the coins were minted in the diocese of Basel, with the rest coming from Zurich and Schaffhausen, as well as Villingen in Germany and Strasbourg, France.

The origin of the coins can be traced to known images used, such as a depiction of a seated bishop for Basel or a ram jumping from a tower for Schaffhausen.

Discovering such coins is rare, said José Diaz Taberno, a researcher from the Swiss Inventory of Coin Finds (SICF), a group established in 1992 by the Swiss Academy of Humanities and Social Sciences.

Up to now only 17 coins of this type have been found in central Switzerland, and none until now were discovered in Obwalden.

Taberno in a statement said the value of the coins, around 10 shillings, in the 13th century is hard to assess.

But from information known about the city of Lucerne, in 1303 a sheep cost four shillings and a cow 12 shillings, while 1.7 litres of wine would have cost two and a half Pfennigs.

The coins were found near a path that was used by merchants, linking Lucerne to the Bernese Oberland and Italy, via the canton of Valais.

“We have a scientific treasure before us for which further investigation will be highly rewarding,” Taberno said. 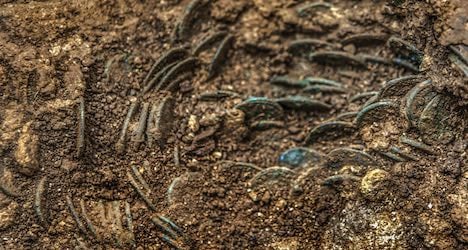 The farmer in the village of Ueken first stumbled upon the “green-tinged” coins in a mole hill in July, the canton said on Thursday.

He contacted Aargau’s archaeological department, which sent out staff to look at the “exceptionally well preserved” coins.

Over three days in September volunteer researchers found more coins under a search directed by cantonal archaeologist Georg Matter, the canton said in a news release.

A total of 4,166 coins made of bronze and silver were collected in a find that “exceeds all expectations by far — something you experience as an archaeologist rarely more than once in a career,” Matter said in a statement.

It is one of the largest discoveries of ancient coins made in Switzerland — all found within an area of a few square metres.

Archaeologists have already started to examine the coins that date from between 270 and 294 AD.

Coin expert Hugo Doppler has examined 200 of the coins, examples of the so-called Antoniniani used during the third century of the Roman Empire, the canton said.

The coins have a silver content of five percent and are well preserved because they were immediately withdrawn from circulation, Doppler said in a statement.

“The owner must have deliberately chosen to hoard these coins for the silver in them guaranteed a certain value in a time of economic uncertainty.”

Researchers believe the treasure was accumulated over several years and buried in the ground.

While the original value of the coins is difficult to estimate, the experts believe they represented a considerable fortune at the time, “in the order of average earnings for one to two years”.

Research is continuing on the find, made south of the municipality of Frick where a few months earlier parts of a Roman settlement were excavated.

Other Roman remains have been found in the area, also known for its dinosaur discoveries, where the Romans had an iron ore mine.

From the first century BC until 401AD the area covered by present-day Switzerland was part of the Roman empire and vestiges of Roman structures can be found across the country.