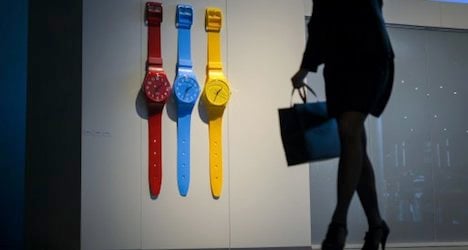 Times look good for the company despite changes in the climate for luxury watch sales in the important Chinese market, the company said.

The Biel-based watchmaker posted a net profit of 1.9 billion Swiss francs ($2.1 billion) last year, it said in a statement.

The company attributed that increase in part to winning legal action late last year in the Netherlands against US jewellery group Tiffany & Co over a failed venture jointly to design and market luxury watches.

The numbers published on Wednesday were well above the expectations of analysts polled by financial news wire AWP, who had anticipated a net profit of 1.7 billion francs and an operating profit of two billion francs.

Swatch, most known for its brightly coloured plastic-cased watches, had already said in early January that its 2013 sales jumped 8.3 percent to 8.8 billion francs.

The watchmaker, which is also the leader in watch component production, said it had injected nearly 700 million francs into machinery, production infrastructure and sales outlets last year.

Despite these investments, the group said it held 1.8 billion francs in disposable cash at the end of January.

That was about the same level as last year before it snapped up US jeweller and watchmaker Harry Winston and Dubai-based Rivoli Investment, a company with a distribution network of more than 360 retail stores in the Middle East.

Hailing the strong results, the Swatch board proposed distributing a dividend of 7.50 francs per bearer share and 1.50 francs per registered share, up 11.1 percent from a year earlier.

Swatch also painted a rosy picture for the year ahead, pointing out that its watch and jewellery sales had been on an upward trend during the first month of 2014.

"All brands had an auspicious start," it said, stressing that "continued healthy growth is expected in 2014."

"Swatch Group is in an excellent position for both the future and for long-term growth," it said.

China's rising appetite for luxury goods had been a boon for the Swiss watch industry, but sales growth fell sharply there last year due in part to a Chinese government crackdown on corruption in the form of extravagant gifts.

But while the most expensive segments have felt the sting, Swatch's broad range has allowed it to weather the storm well.

The group operates in every price range, from the Flik Flak watches for children to prestigious timepieces under, for example, the Breguet brand that can cost more than $1 million a piece.