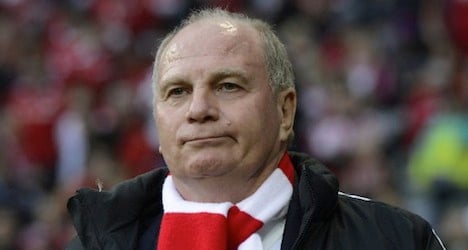 The club’s chief was jailed by a Munich court on Thursday for three years and six months in prison after he admitted to evading more than €28 million in taxes on cash stashed in accounts in Switzerland.

In a statement on the club's website on Friday Hoeness said he was stepping down as president with immediate effect.

“After talking with my family I have decided to accept the judgement of the Munich court regarding my tax affairs.”

The verdict for cheating the German state out of €28.5 million spelled the end of the career of the former star player whose trial has captivated football-obsessed Germany.

Hoeness, 62, had admitted to hiding his wealth in secret accounts with Zurich private bank Vontobel while obsessively "gambling" on stock and currency markets for years.

After the verdict, a visibly shaken Hoeness was allowed to walk out of the packed Munich courtroom, with his arrest warrant temporarily suspended while an appeal was pending.

"We will naturally challenge the verdict," said his lawyer Hanns Feigen, who had argued Hoeness should escape prison or at least receive a suspended term because he turned himself in to authorities in January last year.

But the judge told Hoeness that the belated tax declaration "was by no means voluntary, as you perhaps are trying to convince yourself."

"It was driven by the fear of being discovered."

The judge pointed out that Hoeness had since 2009 failed to turn himself in and only delivered a hasty and flawed declaration in early 2013 when authorities and journalists were already on his case.

"As you have admitted yourself, you played for time," said the judge as a stony-faced Hoeness listened, biting his lip as the verdict was handed down.

Prosecutors, who had sought a five-and-a-half-year term, said they had not yet decided whether to also appeal.

Interest has been huge in the case, with newspapers giving it front-page treatment and people lining up outside the courtroom from early morning to get a seat in the visitors gallery.

Tens of thousands shared their views on Twitter, both for and against the judgement.

One of them, former pro footballer Hans Sarpei, tweeted: "A bad verdict for Hoeness, a good one for Germany's many millions of honest taxpayers."

Hoeness – who also co-founded a lucrative sausage business and has long been a conservative TV talk-show regular – had stayed on as president and board chairman of the European club since the scandal broke a year ago.

Bayern Munich made no immediate statement on the verdict but said its presidium and board would now "meet at short notice" and, in a timely manner but not on Thursday, announce possible consequences.

Munich daily Süddeutsche Zeitung said club leaders "who have been too cowardly to tell the tax evader he is no longer tenable will now have to tell him, in case Hoeness after his conviction still doesn't understand it."

Corruption watchdog Transparency International said the club's decision would be "a litmus test for compliance culture in Germany" and that "an uncontrolled gambling addict can't serve as a role model as president of a popular sports club".

The verdict came after a tough week for Hoeness, who entered the dock Monday and ruefully confessed to tax fraud worth €18.5 million – almost five times more than prosecutors had assumed.

His vow of full disclosure was however contradicted the next day by a tax officer who testified that Hoeness had cheated the state out of €27.2 million.

In its judgement, the court re-calculated the amount again, raising it to €28.5 million.

Hoeness had first turned himself in and paid €10 million in back taxes on January 17th last year, at a time when journalists had already contacted his Swiss bank.

In March, police raided his Bavarian lakeside villa and briefly arrested him, then released him on €5 million bail.

Hoeness has said he originally wanted to benefit from a tax deal Germany was negotiating with Switzerland, which would have guaranteed immunity for tax dodgers who come clean voluntarily.

However, the amnesty deal was torpedoed by the German centre-left political opposition of the time, which argued that wealthy tax criminals should not be let off the hook so easily.