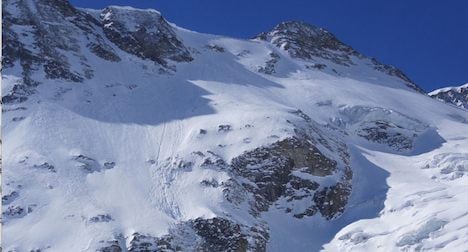 The woman was on a helicopter ski outing with her husband when the accident occurred at around 9.30am, Valais cantonal police said.

The two skiers and a guide were dropped by a helicopter at a landing place on the Aeschihorn at an altitude of 3,350 metres, police said in a news release.

As they were moving to find a place to start their descent, a corniche or ridge of snow gave way and carried the skiers downhill, according to the release.

The husband managed to extricate himself from the snow slide but the guide and the woman remained “prisoners” of the snow mass, police said.

The survivor was able to phone the 144 emergency number to contact emergency services.

A team of six avalanche search dogs and their handlers, 30 rescue specialists and two helicopters were unable to save the victims, whose lifeless bodies were discovered at an altitude of 2,850 metres, police said.

The guide was a local man from Valais.

Valais cantonal police photo shows the path of the avalanche.