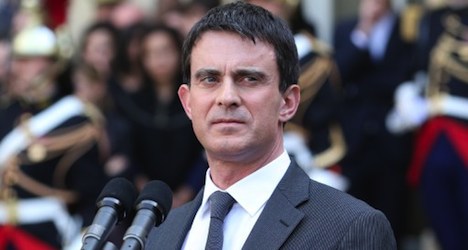 The Swiss ATS news agency highlighted in a report on Tuesday the fact that Valls, 52, while born in Barcelona in 1962, is the son of a Swiss woman, Luisangela Galfetti, from Ticino, and Catalan artist Xavier Valls.

Valls’ origins drew some attention in Switzerland in 2012 when he became France’s interior minister.

But now he is heading the French government, his background is falling under greater scrutiny.

"The last time I saw him, I was 15 years old," his cousin Michele Galfetti, a Swiss television journalist recalled, ATS said.

Valls seemed to be far from the image of the ambitious, tough-talking persona he now projects, according to Galfetti, 52.

"The memory that I have is of a very, very shy person, ill at ease with people," he said.

"To see what he's become is very surprising."

In earlier interviews, Valls, who only became French at the age of 20, recalled childhood holidays in Switzerland.

“I spent long holiday periods at Easter or during the summer notably in Ticino, obviously, where my grandparents lived at Biasca or Ludiano,” he told Swiss television last year.

He told website Swissinfo about his welcoming grandmother, walks in the countryside, meals in “grotti” (small typical Ticinese restaurants), small chapels along mountain paths, in the midst of goats . . . “almost a Heidi postcard, Italian version”.

Walls told Swiss TV he believed having Swiss roots “counted”, while adding that “I’m not sure in France that unfortunately brings great popularity . . . no, I’m joking.”

At a time when the mountain country has come under fire from French authorities over tax evasion issues, it is probably not the best time to brandish the Helvetic ties.

And he has not promoted the links in France, although he has freely talked to media in Switzerland about his origins, ATS noted.

“Yes my mother is Swiss, by the way she still has Swiss nationality, I know Switzerland well,” Valls said in the 2013 TV interview.

His uncle, Swiss architect Aurelio Galfetti, told Swissinfo in 2012 that his nephew had kept a Swiss side through “his love of languages — he speaks Italian and Catalan perfectly — and his pragmatism”.