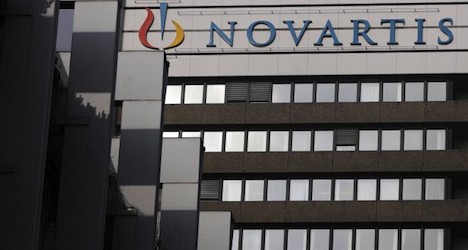 The senior managers "resigned, they are out of the company", David Epstein, head of the firm's pharmaceutical division, said on Thursday.

"This kind of behaviour is unacceptable and a clear violation of our code of conduct," he told a press briefing in Tokyo.

"I'd like to once again apologize for Novartis' involvement in this issue."

The move comes after a panel of outside lawyers hired by the company said earlier Thursday that sales staff also hid their improper involvement in drug studies probing possible side effects of cancer treatments.

The claims marked another blow for the drugmaker, less than two months after Japanese prosecutors raided its Tokyo office over claims Novartis exaggerated the benefits of a popular blood-pressure drug.

In the latest case, the panel found that staff had removed evidence from the Novartis office of their links to the research, which pointed to at least two cases of severe reactions in patients undergoing leukaemia drugs testing.

The probe found sales staff had acted inappropriately by involving themselves in the clinical research at nearly two dozen medical institutions in Japan.

The panel did not find evidence that the data were falsified, but "we noted that there were several irregular practices", said a lawyer speaking on behalf of committee head Kunio Harada.

Failing to report the side effects of a drug "risks violating pharmaceutical law, which could mean an administrative penalty," a health ministry official told AFP.

"We are communicating with Novartis officials over the issue," he added.

The company hired the outside lawyers to conduct an in-house probe after allegations surfaced in press reports earlier this year about employees being involved in the testing, which should have only been led by doctors.

Canadian Francis Bouchard is to succeed Kazuo Asakawa as director of the Pharma division's oncology business.

In February, prosecutors raided the Novartis office after the health ministry filed a criminal complaint against the global firm, which has been under fire since a university said the data in clinical studies might have been skewed to promote the blood-pressure drug Valsartan.

The studies suggested the drug — sold under the name Diovan in Japan and licensed for use in more than 100 — could help prevent strokes and angina.

Under Japan's pharmaceutical law, anyone found guilty of exaggerated advertising can face up to two years in prison or a fine of up to two million yen ($19,000).

Novartis has said it had no knowledge of the wrongdoing.