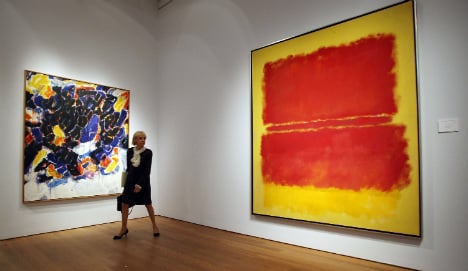 Several people are accused over the "Untitled (Orange, Red and Blue)" that Frank Fertitta III paid $7.2 million for in 2008 from the Knoedler gallery in New York.

The gallery has since closed after it was found to be selling dozens of forgeries of several painters.

Swiss Oliver Wick, a Rothko expert and specialist in American paintings, was paid $300,000 by the gallery for the sale, according to court documents which allege that Wick "was aware of substantial evidence that the painting was a forgery."

"Wick conducted no independent research into the authenticity of this fake Rothko," the documents charge.

Prior to the sale, Wick had written to an intermediary in the transaction stating: "I confirm that this work has been submitted to the team, all is perfectly fine, otherwise I would not want to be involved with it."

The painting had been exhibited at the Fondation Beyeler museum in Basel, Switzerland, where Wick was a curator.

It is part of a series of dozens of fakes made by a Chinese artist from Queens and sold in New York for a total of around $80 million over 14 years.

The forgeries were presented as the works of Rothko, Jackson Pollock, Robert Motherwell, Franz Kline and Willem de Kooning.

The scheme was discovered in 2009 and Knoedler, the main gallery selling the works, closed abruptly in December 2011.

Glafira Rosales, the art dealer who bought the paintings from the Chinese artist and sold them to galleries, pleaded guilty last September and faces decades in prison.