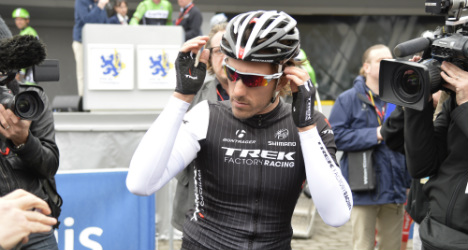 Cancellara was among 199 riders who started the "Hell of the North" race under grey skies and cool tempertures at Compiegne castle, just north of Paris.

The 33-year-old, who is known on the tour as "Spartacus", is looking to equal the four victories registered by Belgians Roger de Vlaeminck and Tom Boonen.

The Swiss rider calls Paris-Roubaix "a war with the cobbles".

Cancellara broke Belgian hearts last weekend when he won the Tour of Flanders for a record-equalling third time.

His Trek team deputy Stijn Devolder withdrew from the Paris-Roubaix because of injuries sustained in the Tour of Flanders. But Cancellara's blistering finishing speed has made him the man to beat.

The race finishes about 3pm at the Roubaix velodrome in northern France.