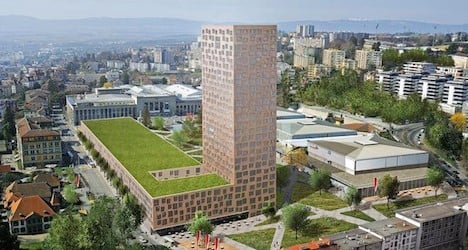 In a referendum on Sunday, 51.9 percent of voters turned thumbs down on the proposed building, dubbed the Taoua, which would have been the tallest building in the Vaud capital.

The 100-million-franc ($114-million) project, advanced by developers Losinger Marazzi, was backed by a majority of city council but opposed by a coalition of diverse interest groups and politicians.

The 27-storey building was touted for adding badly needed housing units (90), as well as two hotels to serve the convention centre.

But many against the Taoua felt it would have stuck out like a sore thumb in the relatively low-rise neighbourhood.

“I regret this result for our project, which was good, but the people have decided,” Lausanne’s Mayor Daniel Brélaz is quoted as saying by the ATS news agency.

Brélaz ruled out trying to revive a similar project for the site, although he said he was open to other proposals.

In a statement issued following the referendum result, the city of Lausanne said the vote was not a rejection of municipal plans for increased densification and economic growth.

“The decision was probably made on the visual aspect of the project,” the municipality said.

Vincent Rossi, president of the Lausanne Green party said the result was a relief.

It was a rejection of “an urbanism from the 1960s that does not appeal to Lausanne residents”, Rossi said.

Voters in nearby Chavannes-près-Renens, west of Lausanne, approved a 117-metre-high residential tower in February.

But a specific design for the tower has yet to be selected and it is is not clear whether there is sufficient financial backing for the project.