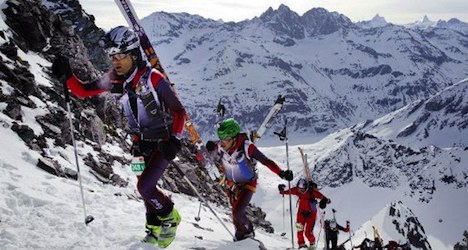 The 5,400 competitors in the "Patrouille des Glaciers" — French for "glacier patrol" — have their eyes glued nervously to the weather reports after heavy snow forced organizers to push the start from Tuesday to Wednesday.

The iconic event, which combines skiing and climbing, is organized every two years by the army.

The most experienced competitors opt to test their mettle on a 54 kilometre route that runs between the southern ski resorts of Zermatt, Arolla and Verbier and takes them over peaks including the 3,650 metre Tête Blanche.

The current record time for completing the course, set in 2010, is five hours, 52 minutes.

A maximum of 17 hours is allowed.

Those daunted by that challenge can instead opt for the 26-kilometre course from Arolla to Verbier, although they will still face peaks of close to 3,000 metres along the way.

Participants are split into "patrols" of three and must be able to ski tied to their team-mates, as well as be capable of scaling mountains with their skis on their backs.

A total of 820 teams from the military are set to take part, with 140 patrols made up of mountain guides and the remaining 840 teams consisting of civilian enthusiasts.

Competitors, who must be aged at least 20 for the long course and 18 for the short version, kit themselves out with survival gear, skis and climbing equipment, for the trek.

The seed for the Patrouille des Glaciers was planted on the eve of the Second World War, as neutral Switzerland prepared to defend the country's borders.

It was the brainchild of two captains from the 10th Mountain Brigade — a force tasked with protecting the southeastern Swiss Alps — who were looking for ways to hone their troops' skills.

The first race was held in 1943, although the authorities decided to ban the event after a patrol was lost in a crevasse in 1949.

The race restarted in 1984, and has enjoyed growing success since then, with 400 more patrols than usual being allowed to sign up this year.

The 2012 Patrouille des Glaciers was cancelled due to adverse weather, and the risks of the ultra-tough race were underlined last month when two Swiss climbers training for the event went missing near Arolla.