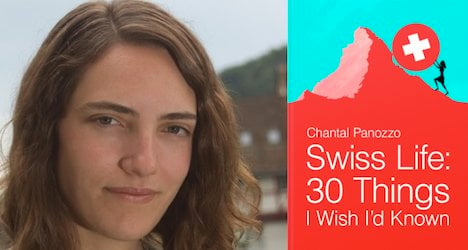 Author Chantal Panozzo and the cover of her book about Swiss surprises.

When her attempts at speaking German failed to break down the cultural divide, the communications graduate discovered that she could make instant connections through that most Swiss of musical instruments — the alphorn.

Panozzo’s husband was converted after attending a weekend course.

An alphorn now sits in the living room of the couple’s apartment.

“That was one of the most amazing things,” Panozzo tells The Local.

“It’s the one thing that actually made people talk to us without us trying to make an extra effort,” she says.

“Sling an alphorn on your back and people just open up. “

Chicago-born Panozzo, 36, moved to Baden, in the canton of Aargau, in 2006 when her American husband took up a job as an IT manager.

The professional copywriter has just published a book about her life as an expat in Switzerland.

Not, as she points out, a chocolate-coated account of the joys of Swiss life but rather the ‘not-for-TV’ version.

Swiss Life: 30 Things I Wish I’d Known is a witty, personal and at times poignant collection of essays.

It chronicles the ups and downs of Panozzo’s experience, from the dashed expectations of exotic expat life as a trailing spouse to the challenges of working with a non English-speaking boss, to unemployment and motherhood.

Her essays became a means of recording her journey and learning about herself — and the Swiss — on the way.

“I don’t know if I planned to write a book about Switzerland, but it kind of chose me,” she says.

“All the things that happened to me, I started writing about them in the personal essay form and it somehow just fell out of me.”

The 30 things the writer never knew range from the use of curd cheese in treating young mothers with swollen breasts in maternity clinics to the fact you can be hired in one language and fired in another.

The problems of learning how the Swiss tick is one of the main themes Panozzo addresses in her book.

Many expats will identify with the writer’s experience of unwittingly breaking a myriad of unwritten rules in her apartment block, from how to use the shared washing machine to the proper cleaning of gutters.

Panozzo’s neighbour Frau Lanter — who only reveals her first name Regula after a year — crops up regularly in the book.

Their relationship, which eventually develops into a fragile friendship, epitomizes the author’s problems in understanding the Swiss.

“I think what was hardest was that the Swiss are so reserved it’s hard to get to know them,” Panozzo tells The Local.

“The fact that my neighbour didn’t tell me her name until we’d been here a year made me feel I was a bad neighbour because we couldn’t get to know each other,” she says.

“But in fact that was just culture.”

About being a foreigner

Panozzo has come to realize that the Swiss and Americans have completely different concepts of personal space — not surprising given the very different sizes of their countries — and believes the Swiss are more assertive of their rights within that space.

“I was shocked that Switzerland is such an organized country but people don’t necessarily wait in a line,” she says.

“People were going in front of me at the cheese counter when I’d been waiting ten minutes, and I just thought, this is so rude!

“But in fact I don’t think they were being rude; I just didn’t understand how to act myself.

“I had to learn what was right here.”

Eventually, Panozzo came to the conclusion that trying to act Swiss does not make you Swiss – you will always be a foreigner.

“I didn’t enjoy acting like someone I wasn’t – even if sometimes it did get me a seat on a crowded train,” she writes.

“So now, when someone gets in my way at the pool or cuts in front of me at the cheese counter, I embrace my upbringing and let them.”

After eight years in Switzerland, Panozzo is mulling the idea of going home.

But she knows it would be difficult to leave a country she has come to love.

She also knows that the home she would return to in the US would not be the same as the one she left.

“If we do end up going back to the States what I want to do is write the companion to this book: American Life: 30 Things . . . because I’m going to see my country as I’ve never seen it before.”