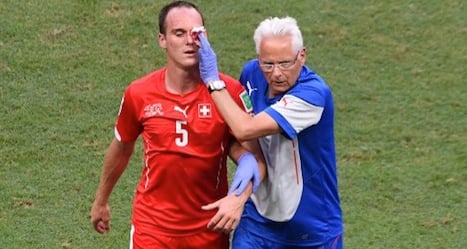 The 31-year-old centre-back was accidentally kicked in the face by France's Olivier Giroud after only seven minutes of their Group E clash in Salvador on Friday.

He had to be helped off with a deep cut over his eye and was taken to hospital where a scan revealed the extent of his injury.

"I have the deepest sympathy for Von Bergen, he's been an important player for us," said Swiss coach Ottmar Hitzfeld.

"The team will play for him now and try to give him some joy from this World Cup."

Von Bergen will fly home on Sunday with one of the Swiss team's doctors, Roland Grossen, who will then return to Brazil in time for their final group match on Wednesday, the Swiss FA's spokesman confirmed.

"It's routine that a doctor accompanies a player home after a serious injury," he explained.

The Swiss next face pointless Honduras in Manaus although even defeat could see them progress if the French inflict a heavy defeat on Ecuador in Rio de Janeiro the same day.

Hitzfeld picked through the wreckage of his side's heavy French defeat and faced the media alone in order to allow his players to get over their disappointment.

"We suffered a clear defeat and we didn't perform well enough, so I wanted to face the press and let the players regenerate," said Hitzfeld.

"The main thing is that the players now have a bit of calm, don't read too much about the defeat and get their heads right for the next game."

Switzerland were held to a goalless draw by Honduras four years ago in the group stages at the last World Cup and Hitzfeld, for whom this is the last campaign before he brings the curtain down on a glittering career, is hoping they go one better this time.

"We met Honduras in 2010 and I am convinced that we have the attack to score a few goals against them," he said.

"It will be difficult for us because of the heat, but that is something we have to deal with."