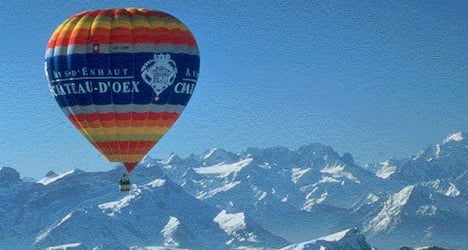 The lawsuit was filed last week in the Los Angeles County Superior Court over the August 2013 balloon crash that killed Grant Adamson, 55, from Malibu, California.

Adamson’s wife, Terry, and his daughters Lauren and Megan, were seriously injured in the crash, which occurred while the family were vacationing in the mountain region of Gstaad.

The lawsuit alleges that the pilot of the balloon, Christian Dupuy, who survived the accident, was responsible for the crash, California newspaper The Malibu Times reported online this week.

The suit claims that Dupuy registered a blood alcohol level above the Swiss legal limit after the crash, the newspaper said.

Dupuy is currently facing manslaughter charges in the Swiss court system, according to the lawsuit.

The balloon plunged about 50 metres after striking a power line near Montbovon, shortly before it was scheduled to land, Fribourg cantonal police said in their report of the incident last year.

The balloon had taken off from Château d’Oex, which is well known for its annual balloon festival.

A pretrial hearing into the case in the US is scheduled for October 20th.