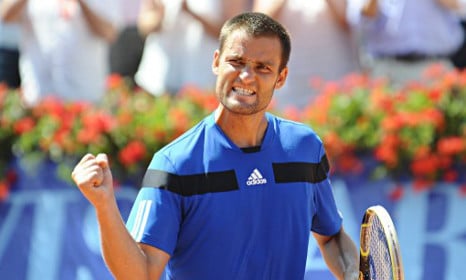 One day after enjoying a photo-op fondue meal with his family at a local alpine mountainside refuge above the pedestrianised village, the 19th-ranked Russian moved through easily into the quarter-finals, after receiving a bye in the first round.

Youzhny, attempting to successfully defend a title for the first time, will be hoping the match goes the same way as last year, when he overcame Haase in the final to take the 2013 Gstaad trophy.

At the bottom of the draw, Viktor Troicki won his second match after his return from a one-year ban for asking to postpone an April 2013 blood test in Monte Carlo due to feeling poorly.

The Serb was hammered by a tribunal and is playing on his last wild card entry with a ranking standing at 847.

He reached the last eight over Andrey Golubev of Kazakhstan 6-3, 6-4.

The event has been penalised at the box office by the withdrawal of Switzerland's Australian Open winner Stan Wawrinka, who cited the need to rest before the start of the North American hardcourt season despite having an appearance contract with the tournament.

However Wawrinka will be on court on Friday as he answers speaker's questions in a q&a session after the first match of the day.

Youzhny continued the clay momentum that he built starting earlier this month in Stuttgart, where the winner of ten career titles reached his first semi-final of 2014.

"Always the first match is not easy," said the 32-year-old. "It doesn't matter against whom you play. Today I played good, I made two breaks and played well on my serve.

"It's been a tough season for me after injury (earlier in the year). But the season is also not over yet. There is still time for me."

Youzhny is playing the tournament for the eighth straight year and ninth time overall, holding a 13-7 record at the venue located 1,050 metres above sea level which plays much like a hardcourt.

Haase had to work for more than two and a quarter-hours to get past Swiss player Laaksonen, the 319th-ranked 22-year-old making his third appearance in Gstaad.

It took the Swiss until the first round this week to earn his first ATP-level win of the season, but was denied in his bid to earn a career-first quarter-final spot.

Haase, who struggled with confidence in winning his opening match, had to ride a wave of momentum before finally advancing.

Laaksonen saved three match points to level at 5-all in the final set as the Dutchman served for the win.

But the fragile 51st-ranked Haase found his reserves to finally secure the victory thanks in part to nine double-faults off the Swiss racquet, with Laaksonen taking defeat on a backhand error.