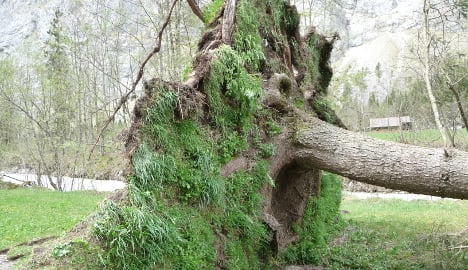 Dynamite is now being used to clear the mud, gravel and fallen trees that are blocking rivers and creeks in the area, regional crisis manager Georges Wüthrich told news agency ATS.

On Friday the army built two emergency bridges over the river Emme after flood waters washed away the existing wooden bridges.

But efforts to clean up farms and attend to crop fields devastated in the storms on Thursday were hampered on Saturday as the bad weather returned.

A counselling team was on hand to help local residents cope with the situation.

Moral was lifted on Saturday as federal councillor Johann Schneider-Ammann, who is from the Emmental, paid a visit to the area and praised the courage of local residents.

They are likely to need it in the days to come, with more bad weather forecast for Monday afternoon and Tuesday.

The risk of landslide in the Emmental is likely to remain unstable until at least Wednesday, according to the authorities.

Central and eastern Switzerland and Lichtenstein also experienced violent storms over the weekend, causing a landslide that blocked the route between Steg and Malbun in Lichtenstein.

In the cantons of St Gall and Schwyz emergency services were called to a number of houses where heavy rains had flooded basements, though the authorities said the situation was under control.

Romandie was spared the worst of the weather over the weekend, though the Paléo Festival near Nyon had to implement its “rain plan” once again.

Festival car parks were closed entirely on Saturday and Sunday.

Earlier in the week the closure of selected car parks had sparked anger in festivalgoers after long queues formed to exit the site.