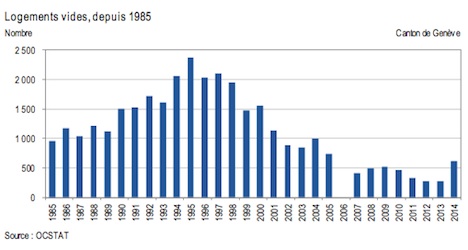 The total number of empty units reached 610 in June, compared with 268 in the same month last year, the office said.

An apartment or house is considered empty when it is withdrawn from the market either for renovations, transformations or demolition, Ocstat said.

The office said more than three quarters of the empty lodgings were located in buildings built before 1971.

So many of them are in the process of being renovated, it said.

And despite the big percentage increase in empty homes, the number remains historically low compared to the period from the mid-1980s to the beginning of the 2000s, Ocstat said.

More than half of the housing units listed as empty (58 percent) are located in the city of Geneva.

In 20 of the canton’s 45 municipalities there were no empty homes, Ocstat said.

A annual federal study released earlier this month showed that the housing vacancy rate in Geneva rose slightly to 0.39 percent in June from 0.36 percent a year earlier.

Availability of housing has remained scarce for more than a decade.

At the time, some real estate management agencies offered free rent for a month as an inducement for tenants to sign leases — a far cry from the situation today.