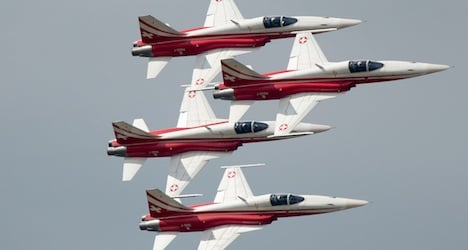 Organizers of Air14 said that 70,000 people attended the show on Sunday after 90,000 visited on Saturday.

With flights of military planes from the Swiss air force and those from other countries, the air show paid tribute 100 years of military aviation in the Alpine country.

The Patrouille Suisse, a Swiss Air Force aerobatic team celebrating its 50th anniversary, performed at the show with its six Tiger fighter jets.

Another air force aerobatic group, the PC-7 Team, also went through its paces to celebrate its 25th anniversary, using its Pilatus training planes.

Swiss Transport Minister Doris Leuthard kicked off the air show last week noting the importance of the aviation industry to Switzerland, noting that its accounts for an annual turnover of 30 billion francs ($32.6 billion) or six percent of the country's GDP.

The second part of the show is scheduled for next weekend (September 6th and 7th).