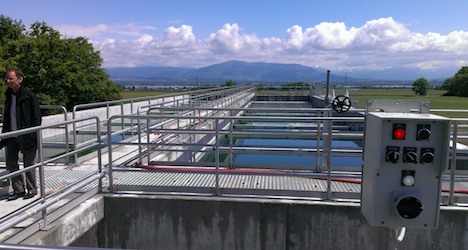 Revenues from the tax will finance 75 percent of the cost of the measures called for in new national legislation to protect water from pollution, the federal government announced on Tuesday.

The new facilities will be installed at existing purification plants to remove micropollutants originating from products such as drugs, hormones, cosmetics or insecticides that even in small quantities can have an adverse impact on fish and other aquatic life.

Existing plants are unable to screen out the microscopic pollutants.

The tax is expected to raise1.2 billlion francs over 20 years to pay for the upgrading.

Once all the sewage plants are fully equipped the tax will be removed, the government said.

The financing will provide equipment for various classes of sewage treatment plants, including those serving more than 80,000 residents, as well as those for populations of more than 24,000 that are located in basins that empty into lakes.

New facilities are also envisaged for plants serving more than 8,000 people where purified water flowing out represents more than 10 percent of the volume of the receiving body of water.

The government said cantons will also be able to ask for upgrading of equipment in sewage plants serving more than 1,000 people when they are located in areas that are either ecologically sensitive or close to reserves used for drinking water.