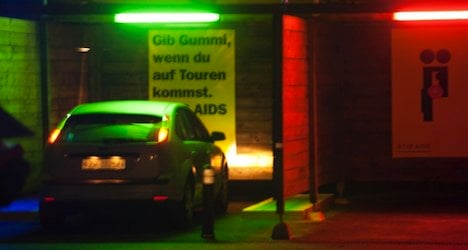 A politician from the northern Swiss city is proposing the move as a way of eliminating problems in the city’s Kleinbasel red light district, the Basler Zeitung newspaper reported online on Monday.

André Auderset, a Liberal MP for the canton of Basel-City, said over the course of the past year the number of prostitutes in the district has grown to the point where they are spilling over into adjacent neighbourhoods.

With residents complaining, Auderset sees Zurich’s example as a model to be followed, the Basler Zeitung said.

In Zurich, authorities have declared the sex boxes, opened in August 2013 in an industrial area, as a success in drawing prostitutes away from downtown streets.

The drive-in sex area is reserved solely for people with cars, who park their vehicles in stalls where they can seek out the services of the women working there.

The sex boxes are under 24-hour surveillance and each stall is equipped with an emergency button for the protection of prostitutes, in case they encounter difficult customers.

Auderset believes Basel could benefit from a similar facility, although he also believes prostitutes now working outside the red light district should be fined on the spot.

But Aliena, a centre for prostitutes in Basel, is not happy with Auderset’s proposal.

“It’s not the solution for the problem,” a representative of the centre told 20 Minuten newspaper.

“The situation (in Basel) is not all comparable to that of Zurich and it’s not by hiding prostitutes that we are going to solve anything.”