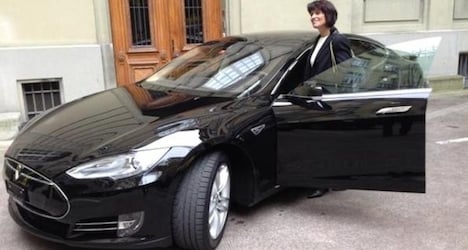 Thomas Aeschi, Swiss People’s Party MP, said it is worth asking whether this is the best time to be buying new official cars when “cuts in the amount of 600 million francs are planned for the coming year,” the Basler Zeitung newspaper reported.

But at least one of the ministers, Leuthard, has been happy to show off her new car — an electric Tesla S85.

Her department recently posted on Twitter a picture of the minister stepping into the battery-powered American luxury car, which can race from zero to 100 kilometres an hour in 5.6 seconds, according to the manufacturer.

The government did not reveal the cost, but Tesla advertises a leasing rate of 1,090 francs a month for the zero-emission vehicle with a range of 500 kilometres on a fully charged battery.

But the ministers are apparently not bound by any restrictions for such cars.

Maurer, Burkhalter and Berset received Merceds S-Class models with a standard list price of between 130,000 and 140,000 francs, the Basler Zeitung said.

Leuthard tested a Tesla last year and was reportedly impressed with the vehicle.

Ministers usually select Mercedes or Audi models (Switzerland has no major automaker plants and imports all cars from abroad) but they are free to choose whatever model they want, the Basler Zeitung said.

Interior Minister Berset, a member of the socialist party, was singled out by the newspaper for selecting a sound system in his car that can cost as much as 15,000 francs, enough alone to pay for a small car.

A spokesman for Berset’s department is quoted as saying he had simply “chosen some of the suggested options that are within the budget of each member of the federal government.”