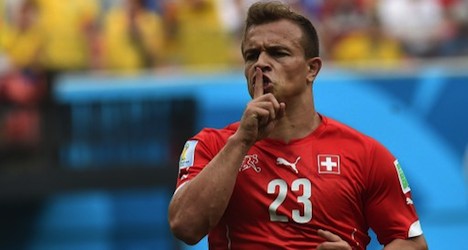 Inter have reportedly agreed to pay €2 million euros ($2.3 million) for the 23-year-old winger with an option to buy him outright for €14 million ($16.5 million) in June.

"Complete agreement between Inter Milan and Bayern Munich on the arrival of @xs_11official (Xherdan Shaqiri) at the +nerazzurro+, all that is missing is the signature," the former European champions tweeted.

Shaqiri, who came up through the ranks at Basel, scored three goals for Switzerland at last summer's World Cup but has found it increasingly difficult to break into Pep Guardiola's Bayern side against the competition of Franck Ribéry and Arjen Robben.

He becomes the second mid-season recruit for Inter after the recent arrival of German striker Lukas Poldoski from Arsenal.

In other developments, Bundesliga club VfL Wolfsburg said it extended the contract with Swiss international defender Ricardo Rodriguez until 2019.

"It was an important step. We've seen 'Richi' evolve so we're delighted to be able to keep him," the club's sporting director Klaus Allofs said without giving financial details of the deal.

Rodriguez had attracted the interest of top European clubs including Manchester United and Chelsea, with the German press r eporting his new deal includes a release clause estimated at between €20 million and €30 million ($23 million-$35 million).

This season he has played 16 matches for Wolfsburg, scoring six goals.

"For me Richi is one of the best players in his position. That he's staying is an important sign for the development of Wolfsburg," added coach Dieter Hecking.

Wolfsburg are currently second in the Bundesliga 11 points behind leaders Bayern Munich.