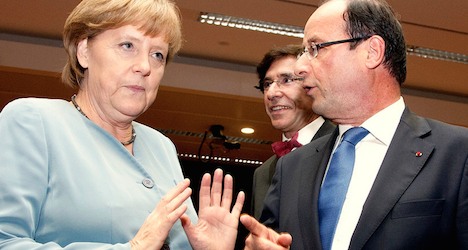 Merkel and Hollande among leaders heading to the Swiss mountain resort. Photo: Council of the European Union

"We are in a critical situation, at the crossroads," the World Economic Forum's founder Klaus Schwab said on Wednesday.

"We have two roads in front of us, one is the road of disintegration, hate and fundamentalism, the other is the road of solidarity," he said, citing the deadly Islamist attacks in France and the subsequent extraordinary show of solidarity around the world as an illustration.

Discussions at the five-day meeting in Davos will likely touch on the attacks at Charlie Hebdo satirical magazine and a Paris kosher supermarket which claimed 17 lives, Schwab said.

But he added that other crises would also be discussed.

"All the crisis regions of the world will be represented," said Schwab.

Ukraine President Petro Poroshenko, who is fighting to put down a deadly separatist rebellion in the east, would be among 40 political leaders at the gathering at the Swiss ski resort.

Iraq's Prime Minister Haidar al-Abadi and the Kurdish leader Massud Barzani, who have seen part of their country seized by Islamic State jihadists, will also attend.

Another key participant at the forum is US Secretary of State John Kerry, who is a key player in peace talks including those between Israel-and the Palestinians, as well as in negotiations with Iran over Tehran's nuclear programme.

Beyond geopolitical crises, hot button issues like the Ebola health crisis, the challenges posed by plunging oil prices, and the future of technology would be examined.

In total, about 2,500 participants, including business leaders like Alibaba group chairman Jack Ma or Google CEO Eric Schmidt, would attend.