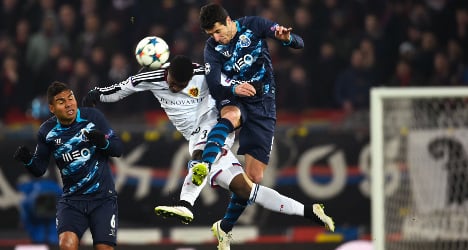 For a long time it appeared that Basel would make home advantage and a fair amount of luck count after taking an early lead and holding out until the closing stages.

Outplayed for long periods by a mobile and swift visiting side at St Jakob-Park, Basel, had goalkeeper Tomas Vaclik, some poor Porto finishing and two refereeing decisions to thank for the slender lead they clung to against the run of play until a late penalty.

Basel drew first blood in the 11th minute as Paraguayan Derlis Gonzalez shrugged off a challenge from Alex Sandro running on to a long defence-splitting ball through the middle from Fabian Frei and squeezed it past the onrushing Fabiano in the Porto goal.

But in his over-exuberant celebrations, Gonzalez appeared to hurt himself and had to have treatment to a calf before he could continue.

On 20 minutes, Porto's Danilo served notice of the visitors' attacking intent when he cut in from the right and fired a left-footed show low into the right-hand corner but Vaclik got down smartly to turn it round the post for a corner.

Then, having struggled on for a further 10 minutes, Gonzalez finally hobbled off and was duly replaced by Davide Calla three minutes later.

Porto were playing some neatly controlled football and thought their superior possession had been rewarded on 35 minutes when Cristian Tello appeared to spring the offside trap running on to a ball from Hector Herrera and scooped the ball over Vaclik but the assistant referee stood firm and called it offside.

With both sides showing a muscular determination in the tackle, English referee Marc Clattenburg ended the half with four names in the book, Frei and Mohamed Elneny for Basel and Casemiro and Oliver for Porto.

Five more followed in quick succession in the second half, with Basel's Walter Samuel, Shkelzen Gashhi and Marek Suchy, along with Porto's Alex Sandro and Danilo also seeing yellow for ill-timed tackles.

It looked as though Porto were finally back on level terms within three minutes of the restart as Casemiro scooped the ball home in a crowded area from a corner after Vaclik parried an initial header but again it was ruled out by Clattenburg after a long discussion with the assistant, apparently for a foul on the 'keeper.

Ricardeo Quaresma, surpisingly missing from Porto's starting line-up, finally got a run out on the hour, replacing Brahimi.

But it was fellow-striker, Colombian Jackson Martinez who should have finally levelled in the 65th minute when he ran through and fired point-blank at Vaclik who somehow got his body in the way and helped the ball loop up over the bar.

In the end, it took a penalty from Danilo 11 minutes from the end after Walter Samuel had handled his cross in the area to bring Porto a deserved share of the spoils.