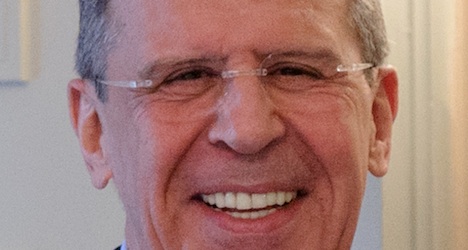 Speaking at the opening of the UN Human Rights Council's main annual session in Geneva, Lavrov insisted the killing would "be fully investigated within the full framework of the law to ensure the perpetrators are brought to justice".

"President (Vladimir) Putin immediately handed down all instructions and is ensuring special control over this investigation."

Lavrov also met his US counterpart John Kerry to discuss ways of ending fighting in Ukraine and voiced alarm at the situation there.

"The situation in Ukraine is of great concern," he told the council, after UN High Commissioner for Human Rights Zeid Ra'ad Al Hussein said the death toll from the conflict that erupted last April had passed 6,000.

"There has been an upsurge in the activities of ultra-radical groups," he said, possibly in reference to ultra-nationalist organization Right Sector,
which has been battling alongside government forces.

"We call on the Ukrainian leadership to . . . pursue a course towards peace and reconciliation in the multi-ethnic Ukrainian society on a mutually
acceptable basis," he said.

But Lavrov also welcomed "tangible progress" in the implementation of a February 12th peace deal, saying "the ceasefire is being consolidated, heavy weapons are withdrawn".

Fighting has halted along most of Ukraine's frontline, raising hopes that Kiev and pro-Kremlin rebels holding parts of the east are moving towards
implementing the shaky deal.