The UN health agency had previously issued guidelines that sugars should make up less than ten percent of a person's total daily energy intake, but in a new twist urged countries to strive for half that.

Setting the bar at five percent would mean people should consume no more than 25 grammes, or the equivalent of six teaspoons of sugar a day — less than the ten teaspoons in your average can of soda.

Health-hazardous free sugars, in the form of table sugar, fructose or glucose for instance, are added to foods and drinks by manufacturers, cooks and consumers themselves, and are naturally present in substances like honey and fruit juices.

The guidelines do not refer to sugars in fresh fruits, vegetables and milk, since there is no evidence they are harmful, WHO said.

The UN agency pointed out that much of the so-called free sugars we consume today are "hidden" in processed foods that are not usually seen as sweet, like ketchup, which contains a full teaspoon of the sugar in each tablespoon.

WHO has for more than a decade recommended keeping sugar consumption below ten percent of a person's total daily energy intake — a target it considers clearly supported by scientific evidence which countries should adopt as policy.

But the UN health agency decided to halve the previous recommended level following a year of discussions among WHO member states.

The five-percent recommendation however remains "conditional", WHO said, since too few epidemiological studies have been carried out in populations with such low sugar intake to allow a clear comparison. 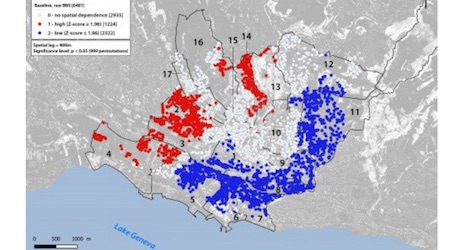 The study, involving academics from Lausanne’s federal institute of technology (EPFL), found that people living in the western, working-class areas of the city are more obese than their counterparts living in the more affluent neighbourhoods to the south and east.

Doctors and geographers pooled their expertise to develop a body-mass index (BMI) map of Lausanne after more than 6,000 city residents volunteered to hit the scales.

The results showed that the usual factors — education, income, age, health, ethnicity, gender and alcohol consumption — could not account for why residents in some parts of the city were heavier than those in others.

The research, published in the British Medical Journal Open, concluded that “urban living itself could play a role”, EPFL said on its website on Tuesday.

The data was analyzed by geographers from EPFL and epidemiologists from the university hospitals of Lausanne (CHUV) and Geneva (HUG).

This remained even after obesity levels were weighted to account for factors that affect weight such as income, education level, age and other factors.

“It appears that the urban environment has a major impact, independent of income and other common factors,” Idris Guessous, a medical doctor from CHUV and HUG and co-author of the study is quoted as saying in a news release from EPFL.

Such factors as distance from green spaces, access to stores, fast-food restaurants and “geographical compartmentalization” could be responsible for the differences, although more research is needed, she indicated.

Contagious behaviour of residents in a neighbourhood could have an impact on human health, researchers believe.

If urban living does play an important role in obesity there may be ways to address the problem, Guessous said.

“You cannot change your age, it’s not easy to act on your educational level, and equal income for all is the stuff of utopia,” she said.   “But we can do something about city living,” she said.

“Once we’ve gained a better understanding of the role of urbanism, we’ll be able to look at the more affluent suburbs and get ideas on how to improve disadvantaged neighbourhoods.”