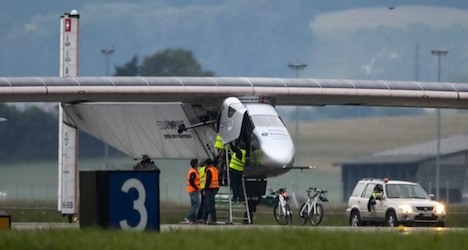 The aircraft touched down in the western state of Gujarat at 11:25 pm local time to finish its second leg in a little less than 16 hours after
taking off from the Omani capital Muscat.

Live footage on its website showed a faint line of white-and-blue lights of the plane in the pitch-black night as the Solar Impulse 2 approached Gujarat's main city of Ahmedabad.

Members in the control room applauded as Pilot Bertrand Piccard, who was at the controls on the 1,465 kilometre journey over the Arabian Sea,
landed at Sardar Vallabhbhai Patel International Airport.

The Solar Impulse will be in Ahmedabad for four days during which "several events are planned on the theme of renewable energy and sustainable development", according to the Swiss embassy.

The aircraft will embark on its fourth leg to Myanmar on March 16th after making a short stop at the Hindu holy city of Varanasi in northern India.

The sea legs pose the greatest challenge for the Solar Impulse team as any loss of power over the water would leave the pilot no alternative but to bail out and await rescue by boat.

Much bigger crossings lie ahead as Piccard and fellow Swiss aviator André Borschberg, who alternate at the controls of the single-seat aircraft,
traverse the great oceans.

The longest single leg will see one of them fly solo non-stop for five days and nights across the Pacific from Nanjing, China to Hawaii, a distance of 8,500 kilometres.

Muscat was the first of 12 planned stops on the plane's journey around the world from Abu Dhabi, with a total flight time of around 25 days spread over five months.

He spoke of an "emotional" trip, telling reporters he cruised at 6,000 metres because the trip was "short".

Piccard was flying even higher as he entered Pakistani airspace on Tuesday, at 8,230 metres, his support team said.