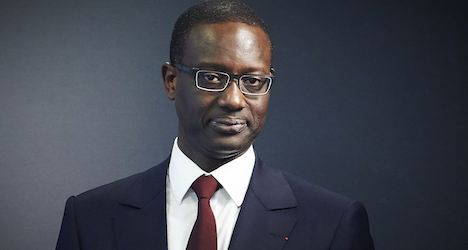 The second biggest bank in the country this week announced that Thiam, a French citizen originally from the Ivory Coast, will replace American Bradley Dougan as chief executive in June.

“For us, Thiam is a role model,” Celeste Ugochukwu, president of the Swiss chapter of the Africa-Diaspora Council, told 20 Minuten newspaper in an interview.

“He showed that it pays to work hard.”

The former head of UK-based insurer Prudential, Thiam offers proof that “anyone who is hard working and talented can make it to the top, no matter what skin colour.”

Ugochukwu said the image of Africans in Switzerland is currently “rather negative” and he hoped Thiam’s appointment as the first black head of a global bank would help change that.

“It’s a bit like when Obama was elected US president.”

Many Swiss regard African refugees in the country as lazy people who do not want to work and rely on the state for handouts, Ugochukwu said.

Africans are often seen as drug dealers and men who harass women, he said.

Now, “Thiam shows there are extremely successful and well-educated Africans.”

Thiam, who studied at elite French schools such as the Ecole Polytechnique and the INSEAD business school, has spoken of the racism he encountered when pursuing a career in France, explaining that is why he went to England.

Ugochukwu said he believed most Swiss have no problem with black people “but clearly there is a minority that has problem with us, but who also have a problem with other foreigners.”

He said many of the estimated 100,000 Africans living in Switzerland face harassment by authorities.

Many complain of being repeatedly checked on roads and in public transport, where they are asked to provide documents to prove that they are in the country legally.

The Africa-Diaspora Council is drafting a proposal to submit to the federal office for migration, police, customs and the cantons to see whether this situation can be changed for the better.

Ugochukwu, originally from Nigeria, is a member of the Swiss Federal Commission against Racism and is running for a seat in the federal parliament as a member from the canton of Bern.

Credit Suisse chief executive Tidjane Thiam was forced to resign in February 2020 after revelations the bank had hired investigators to follow Iqbal Khan, head of international wealth management, because he had opted to move to arch-rival UBS.

It also emerged that Credit Suisse had spied on the former head of human resources.

On Sunday, Le Matin Dimanche and the SonntagsZeitung reported that the bank had also planned to have the ex-husband of Thiam’s partner followed.

Citing unnamed sources, the newspapers said it was not clear whether this actually happened, but added it was highly probable that Thiam knew about the plans.

Contacted by AFP, Credit Suisse said it did not comment “on specific FINMA enforcement matters nor on any speculation related to third parties, former or current employees.”

The fresh allegations come after FINMA announced this week that its probe “revealed that in the period between 2016 and 2019 Credit Suisse planned seven observations, most of which were carried out”.

“In two cases, members of the executive board were observed in Switzerland and, in addition, other former employees and third parties abroad.”

This week, the regulator imposed punitive measures on the bank, reprimanded two individuals, and opened enforcement proceedings against three others.

The scandal sent shockwaves through banking circles. According to reports, the surveillance also targeted the environmental organisation Greenpeace.

RACISM
Protests force Switzerland to grapple with its own ‘George Floyd’ case
Url copied to clipboard!