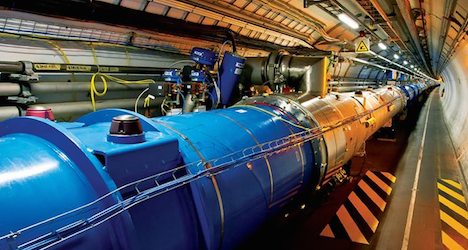 A section of the Large Hadron Collider. Photo: CERN

The error occurred last Saturday in one of the Large Hadron Collider's (LHC) magnet circuits, the laboratory said in a statement.

"It is a well understood issue, but one that could take time to resolve," it said.

The LHC is a 27-kilometre ring-shaped tunnel, in which two beams of protons are sent in opposite directions.

Some of the protons smash together, creating sub-atomic rubble that may hold clues to novel particles, from which physicists hope to learn more about the fundamental building blocks of all matter, and the forces that control them.

In 2012, scientists at CERN, one of the world's top research centres on particle physics, announced they had discovered the Higgs boson, until then only theorized as the mass-giver to all matter — a feat crowned with the 2013
Nobel Prize in physics.

The LHC has since undergone a two-year upgrade that nearly doubled its muscle.

The lab's super-powered hunt for particles that may change our understanding of the universe, was due to resume any day now.

Beams containing billions of protons travelling at 99.9-percent the speed of light, were to have begun recirculating in late March, while collisions had been planned for end-May or early June.

"In the grand scheme of things, a few weeks' delay in humankind's quest to understand our universe is little more than the blink of an eye," CERN director Rolf Heuer said.

Scientists hope the new run of the LHC will shed light on theoretical concepts like dark matter and dark energy, and possible extra dimension.