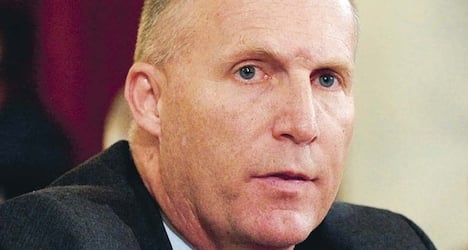 Newman, 50, stepped down in February as chief executive of Zug-based Transocean as observers blamed him for making "strategic errors" by expanding deep-well drilling operations before oil prices plunged.

The company, one of the world's largest offshore drilling contractors and originally based in the US, posted a net loss of almost $2 billion for 2014.

Its share price has plummeted from around 96 francs when it was listed on the Swiss exchange in 2010 to under 15 francs.

Chairman Ian Strachan, a British and American citizen educated at Cambridge University, is now acting as the company's acting CEO.

The financial performance of Transocean under Newman demonstrates how well executives can be paid even when the companies they lead achieve poor results.

As the top bread winner last year, he overtook Novartis CEO and fellow American Joseph Jimenez, who earned 12.6 million francs in 2014 as head of the Basel-based pharmaceutical giant, according to a ranking from the ATS news agency, released on Wednesday.

Brady Dougan, another American expat who is CEO of banking giant Credit Suisse until June, when he will step down, ranks fifth with a pay packet of 9.7 million francs.

Dougan’s wages mark a climbdown from the 70 million francs he earned in 2010, reflecting a moderation in Swiss executive salaries in the past few years.

Nonetheless, ATS said of 25 Swiss-based companies examined, 18 boosted the pay of their chief executives in 2014, five of them significantly, while eight reduced the amount they paid their CEOs, but “not drastically”.

The study showed that compensation for Swiss company executives was highest in the country’s two biggest banks.