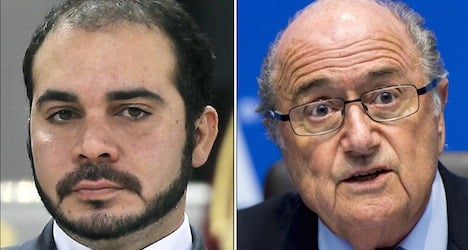 The 79-year-old head of sport's most powerful federation is favourite to secure a fifth term in a vote on Friday but has faced an unprecedented challenge from Fifa vice president Prince Ali bin al Hussein while European football leaders have stepped up their criticism of the Swiss leader.

Blatter said “I am confident” as he entered a meeting on Tuesday of the Concacaf north and central American confederation in Zurich.

Concacaf makes up 35 of the 209 federations that will vote on Friday and the president traditionally addresses the pre-congress meeting of each regional confederation.

The Fifa leader has faced renewed calls for change from Prince Ali of Jordan and Uefa president Michel Platini in the run up to the vote.

Other challengers who have withdrawn from the race have also hit out at Blatter's tactics.

Former Portugal great Luis Figo, who backed out last week to support Prince Ali, said the vote would give Blatter “absolute power” for
another four years.

“Luis Figo is a free man,” Blatter responded in his comments to reporters.

“He can say what he wants.”

In an excerpt of a column he has written for the Fifa Weekly magazine, Blatter called on all federations to “to safeguard the interests of football and protect the game from negative influences.”

The short extract did not say what the “negative influences” are but the Fifa has increasingly railed against match-fixing and racism in the game in recent months.

The full column will be released on Thursday.